The last time Russell Crowe came to Japan, eight years ago to promote A Beautiful Mind, he was dressed like a slumming indie rocker (he was still fronting that band, Thirty Odd Foot Of Grunts) and chain-smoking on the dais. Though he was cordial, he seemed more interested in establishing his average guy bona fides and talking about the upcoming World Cup (“Who do you think will win?” Audience response: blinking silence) than promoting the movie; and, with the local distributor exercising Gestapo tactics on behalf of the studio (blunt instructions to not ask personal questions on threat of the evil eye; required release forms pledging that photographs and quotes would not be reproduced on the Internet), the whole affair lent Crowe the air of a prima donna working his mojo.

What a difference a marriage and middle-aged fatherhood makes. At a Nov. 24 Tokyo press conference to promote Robin Hood, his fifth joint with director Ridley Scott, Crowe looked stout and comfortable in his sober dark suit, a neatly trimmed beard, and a hairstyle that would have found its perfect milieu on an episode of Starsky and Hutch. He didn’t smoke a puff and answered all the questions–even the boilerplate ones, even the personal ones–thoughtfully if somewhat blandly, and when it was time to trot out the requisite Japanese celebrity at the end for the photo op, he was not only game, but added some welcome chattiness to a p.c. convention that’s usually awkward for foreign guests since they have no idea who this bubbly person is (it’s always a cute starlet or a comedian) and how they should react to her/him. “That’s a really amazing outfit,” he said in reference to veteran “celeb” talento Uno Kanda and her self-designed leather getup. “In Australia we call that kind of hat a fascinater.”

The p.c. itself was definitely not a fascinater. It was a brief 30 minutes (meaning, minus translation, only about 15 to 20), and no one asked the more interesting questions surrounding Robin Hood: i.e., about the long gestation of the project that saw it originate as a movie centered on the legend’s nemesis, the Sheriff of Nottingham, to a movie in which Crowe would play both the Sheriff and the title outlaw, and then into its final origin-story incarnation, which barely has room for the sheriff; or about the obvious parallels that the movie makes between Robin Hood’s anti-tax, anti-big government stand and the current trend for same among the American electorate. About as close as he got to the latter was an aside appended to a discussion of “Why do Robin Hood again?” in which he conjectured that “we all, from a global perspective, like the idea that if things are going badly somebody will stand up and fight on our behalf.” In that context, this Robin Hood doesn’t so much take from the rich and give to the poor. He takes from the authorities and gives to beleaguered property owners. To the hoi polloi of Nottingham and Sherwood Forest, he’s simply a good show.

Since the Japanese show biz reporters always configure their questions as Trojan Horses that can elicit, no matter how subliminally, answers that reveal the stars’ personal lives, pecadilloes, and, most importantly, their opinions of Japan and Japanese people, they ate up Crowe, who was so forthcoming he practically asked the questions himself. He went above and beyond the call of duty in response to that dull chestnut–How did you prepare yourself physically for the role?–and, perhaps inadvertently, indirectly explained his portliness. Note the careful deployment of the word “relax”:

“I always take a different approach with every character, but, as you rightly point out, Robin Hood was a very physical job and a long shoot. I would say there was probably six months of preparation leading into it geared to the physical, mainly learning the skill of archery; but also just getting to a point where aerobically and muscularly you’re fit and strong enough to handle that labor day after day. I like to play with my body. I like to use my body in my roles. My normal fitness routine, day-to-day, is practically non-existent. I’m not really the characters that I portray, but I do like to actually shape my body for a particular character. As I get older, that gets a lot harder. I have collected a number of war wounds over time. I have grade-four tears in both Achilles tendons. I have shin splints from landing on hard ground. I have a degeneration in my left hip. I’ve had two operations on my left shoulder. I have a rib in my upper thoracic which pops off the spine every now and then. And occasionally I have neck problems. But when you’ve fought as many battles as I have for the film camera it’s to be expected that over time you will degrade. So for about the last 12 months I have allowed myself to relax.”

He got genuinely personal in response to a question from a GQ writer, who asked him about marriage and fatherhood. “It’s the greatest thing that’s ever happened to me,” he said genially as the emcee squirmed. “I was friends with my wife for a long time before we actually decided to get married. I met her in 1989 and we got married in 2003. We got pregnant on the honeymoon. That’s the way it’s supposed to be, I would think. I have two sons, now: Charlie, who’s age 6, coming on 7; and Tennyson, who is age 4. People often ask me, particularly because I’m in this business, if I will allow them to be in the business or if I will push them towards it. On a daily basis, I just try to be the father that they need, and it’s been such an enriching thing to have two young minds and souls to educate and refocus me.” He even pointed out that his companion on this junket, American actor Kevin Durand, who plays Little John, just got married. Durand, who had little to say during the press conference. What he did say indicated that he’s not very experienced in these kinds of promotional things. “I’m using this time in Tokyo to point out all the beautiful children so [Kevin] gets the idea that it’s time for him to become a father, Crowe commented.” Rich applause, to which Durand replied, “All I have to do is convince my wife.”

Crowe waxed sappy on his relationships with costar Cate Blanchett (variably “an exceptional actress” (twice), “a fantastic actress,” “a great energy on the set,” “a very warm person”) and his longtime relationship with Scott, the director who helped him win that gladiating Oscar. “Yes, I’ve heard Ridley and I described as an old married couple before,” he said. “I think in the full sense of that, there is a complete relationship. We don’t hesitate to comment on things about each other and the work that we’re doing that we think can be improved. But at the same time there are other things that we do that are without the need for words, where we just understand what’s required right now at this moment. I love working with Ridley because it’s like working with some grand Italian painter like [long pause] Raphael or something. I’m in the very privileged position of getting to hold the paints for the artist. When he tells me he needs more blue, I do the very best I can to give him more blue. I’m always enthralled when I sit back and watch what he’s done. And that doesn’t matter if it’s a period piece or a contemporary piece, or even the little comedy that we shot in France a few years ago called A Good Year. There’s a lot of people in my business who don’t take the job seriously. And I understand that it’s only entertainment. I do understand that. But I like to know when I go into a movie theater that the movie involved in making the film I’m going to see have been committed and, essentially, at the core of it, love their job.”

The interpreter conveyed these comments in Japanese and when she was through Crowe amended them. “Actually, Titian is the artist I should have used as the example,” he said. “Not Raphael.” 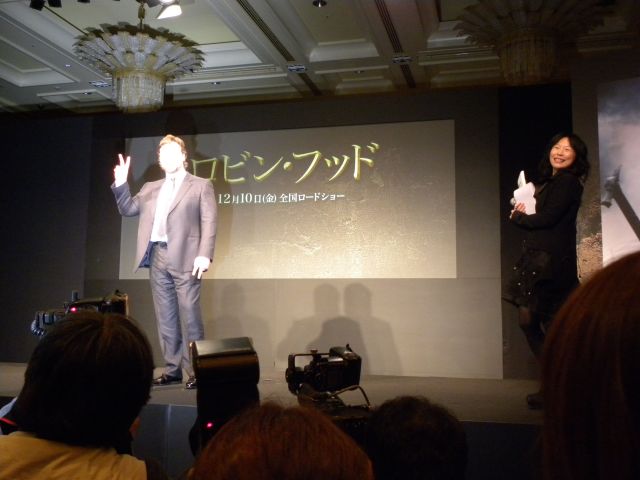