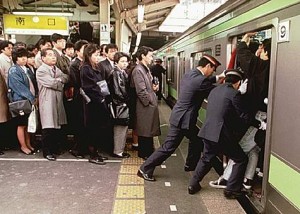 Here’s this week’s Media Mix, which is about the revival of resolve to decentralize Tokyo in response to the Mar. 11 earthquake. Most of the article deals with the macro aspects of moving the capital and/or relocating corporations. At the micro level, such a development would, of course, alter Tokyo’s special character considerably. I’m not talking so much about neighborhoods, but rather the relationship between the center of the city and its outlying residential communities, and if a good portion of the businesses that make their headquarters in central Tokyo move elsewhere, “commuting hell,” as it’s still often called, could become merely a memory, another subject for nostalgic reveries thirty years from now. Just as so many TV variety shows now gain entertainment mileage out of reminiscences of the bubble era of the 80s (which wasn’t so great), maybe three decades hence we (or, more exactly, you–I may not be around) will be fondly recalling Tokyo when it was the center of the universe and we had to endure one hour-plus commutes on packed trains twice a day. Though property values in Tokyo and surrounding areas haven’t risen substantially over the past twenty years, the city center will likely still remain expensive for middle class and those of lesser means, but it seems just as likely that with the exodus of a good portion of the workforce closer bedroom communities such as those on the Tokyo-Saitama and Chiba-Saitama borders will become downright affordable. One could even predict a surplus of vacant properties since the population is already dropping. Such a development might wreak havoc on the economy but by now most homeowners have probably realized that they’re never going to get back what they paid for their properties anyway, even if relocation doesn’t happen. The quality and the demand just aren’t there. But the possibilities in terms of city planning and social impact are certainly fascinating.