Posted on October 9, 2011 by philipbrasor

Yesterday while working in the press center I was cornered by a perky young reporter from Hong Kong and her cameraman. They wanted my opinion on the new Cinema Center, as well as the festival’s general organization. This has happened to me before, at least twice, and I tend to say the same things, that the organization is probably as good as can be expected but that some things just don’t get done–like interview requests (we’re supposed to go through foreign press liaison, but I’ve only had success with them once in all my times coming here; now I just do what everyone else does, go directly to the source or their representative, even though it doesn’t matter this year because I’ve only got 600 words). As for the Cinema Center, I haven’t had time to explore it at any length, and apparently it isn’t finished. I don’t really like the way it looks; it’s institutional in an anachronistic way–all concrete and big windows. It doesn’t feel new at all.

Though I won’t see the Jafar Panahi film until tonight, based on the two I’ve seen so far, this seems to be a good year for Iranian movies. As austere and chilling as “Good Bye” was, “Mourning,” which is competing in the New Currents section, was elaborate both emotionally and formally. The plot flirts with contrivance: When a couple dies in a traffic accident during a vacation, the wife’s sister and her husband are at pains as to how to break the news to the couple’s young son. The catch here is that the sister and her husband are both deaf, and as they drive the long distance from the vacation spot to Teheran they argue over what to do in sign language while the boy sits in the back seat, listening to classical music on his iPod and supposedly oblivious to their conversation. Actually, he isn’t oblivious at all since he’s been close to his aunt and uncle his whole life and knows some sign language. The idea of mourning as something personal isn’t as important to the film’s power as is the message that people are basically good and will try to make decisions based on the best intentions. That’s the polar opposite of the message in “Good Bye,” but “Mourning” isn’t saccharine or blind to the evils of the world. It just allows us to see that effort. The director, Morteza Farshbaf, uses lots of gimmicks and at times the movie comes off like a stylistic hodgepodge, but nothing rings false. The use of POV, especially in terms of sound design, is stunning.

People are also basically good in Sion Sono’s “Himizu,” but since Sono’s universe is unspeakably cruel to begin with their efforts are usually useless. I don’t normally see Japanese movies at this festival, since most of the ones they show have already been released in Japan and I don’t want to step on Mark Schilling’s toes, but “Himizu” won some awards at Venice and won’t be released in Japan until next year. Besides, it’s the first fiction movie I’m aware of that incorporates the Mar. 11 earthquake/tsunami into its story. In a nutshell, it was a waste of time. I don’t like Sono anyway, his extreme form of cinema to me is phony and pretentious, and despite the obvious feeling he has for the victims of Mar. 11, “Himizu” is just hokum. Based on a manga, it centers on Shimada, a junior high school student who has been abandoned by his parents to run the little boat rental shop they own. He aspires to be “normal” in a world that he views as evil, and a girl in his class develops a crush on him based on things he says in class that she scribbles on posters and tacks to the walls of her room. It’s hinted that Shimada survived the tsunami (though it isn’t clear why his boat rental house, which is right on the water, survived), and Sono inserts tracking shots of the real devastation that’s quite powerful in and of itself, but the allusions don’t add anything. We’re meant to compare Shimada’s redemption after he kills his father with Japan as a country rising out of the disaster, but the two ideas don’t jibe at all, and what we get in the end is Shimada and the girl running down a road screaming “Ganbare” (Don’t give up) at the top of their lungs over and over. As a cliche it makes what came before it–as usual with Sono, the violence is excessive–seem even more empty. 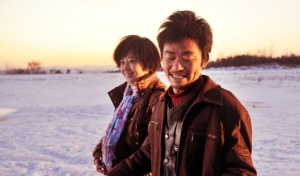 Not to make this too clinical, but the use of deaf people in “Mourning” was inspired. The use of a deaf person in Han Jie’s “Mr. Tree” is more conventionally Asian. The deaf person, a young masseuse in a provincial Chinese mining town, is characteristically independent and spunky–she’s also gorgeous, which should mean she isn’t made for the titular hero, the town idiot who may be mentally handicapped or autistic, but in any case he’s not very bright and not very ambitious, until he meets the masseuse. Their courtship is cute and affecting, but in a sense the romance is a minor plot consideration, and I came away from the film not really knowing what Han was getting at. Though he obviously has something to say about Chinese industrial progress (he’s an acolyte of Jia Zhangke), he doesn’t say much. The town’s big mining concern is slowly relocating everyone to a new housing development that they also have a stake in, mainly by screwing up the water supply. Shu is more concerned about finding work after he loses his car mechanic job due to a dumb accident, but he’s also haunted by images of a brother whom his father hanged because of public hooliganism. It’s not clear if this incident really happened, but it connects to an epiphany on his wedding eve that leaves him almost catatonic and liable to visions that people in town take as prophecy. Han really doesn’t do much with this line either, and since it develops so late in the story there’s nowhere to go except deeper into madness. In many ways the movie is impressive. The acting and the photography are subtle and sure. But the movie lacks something and I’m not sure what it is.

Another director-acolyte, Lee Kwang-kuk, copies his mentor, Hong Sang-soo, almost religiously in “Romance Joe,” but with a difference. Lee demonstrates tight command of his snakey narrative, which tells one story through various sources, some of which are obviously unreliable. He also prefers long static scenes of people in dim rooms and drinking establishments having involved conversations and getting plastered. The difference is that Lee isn’t much for nuance. His basic tale about a movie director who disappears for a time to contemplate his effect on a girl he loved when he was in high school doesn’t provide a lot of traction for the visual ideas, and the humor, while carefully considered, isn’t potent in the way Hong’s is. He gets more emotional mileage with two drawn-out scenes of wrist-cutting than with any of the theme-based plot points. Nevertheless, it struck me as I left that no one makes movies like this except Koreans who want to copy Hong Sang-soo (there are quite a few, actually), and I can think of much worse directors to copy, like Sion Sono.