Posted on September 9, 2012 by philipbrasor 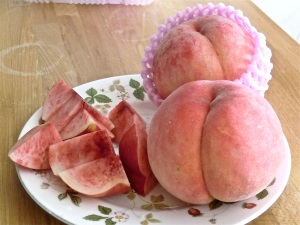 Here’s this week’s Media Mix, which is about “rumor damage” and its effect on sales of produce from Fukushima Prefecture. Much of the contentiousness I refer to near the end originally arose when it was mainly the foreign media who were saying dire things about the possible effects of the Fukushima No. 1 Nuclear Reactor disaster. Charges that outlets like CNN and the New York Times were and still are purposely exaggerating unproven dangers to boost page hits continue to this day in social media. These parties’ complaint is that such coverage causes unneeded fear among Fukushima residents and paranoia throughout Japan, making it difficult for Fukushima producers to make a living. There are two reasons why I’ve found this argument disingenuous. First, I doubt very much that the majority of Fukushima residents pay any attention to CNN (whose credibility problems are of a much different type than what they’re being accused of here) or the New York Times. The vernacular media has pretty much followed the government line on the Fukushima disaster–or at least they did until the nuclear power protests became too big to ignore–so if you’re going to blame anyone for “rumor damage” then it’s the authorities. Second, the idea that the news media should avoid reporting information that may be vital to the decision-making processes of people who live in the area so as not to make those people uneasy contradicts one of the basic uses of journalism, which is to give people information they can use. Those who believe the media conveys such stories purely for self-serving sensationalist reasons would seem to have their own agenda beyond safeguarding the sensitivities of the local population. People on the other side of the debate, those who are against nuclear power and believe Fukushima is a dangerous place to live, have sometimes accused their opponents of sucking up to the “nuclear village,” which is reactionary and simplistic. Nevertheless, the whole argument comes across as something of a propaganda war.

The only thing we do know is that we don’t know everything. The effects of radiation on the human body are still being researched and debated. The layperson can only study all the available materials, listen to both sides, and draw his or her own conclusion. If that person concludes it’s best to not take any chances, that decision should be respected in accordance with the age-old truism “better safe than sorry.” That is basically what the two doctors from the International Physicians for the Prevention of Nuclear War told Tokyo Shimbun. They went to Fukushima and talked to people. Many mothers told them they were anxious because they didn’t believe they were getting enough information about the dangers of radiation. The doctors said these women deserved to receive as much information as possible, implying they were intelligent enough to make sense of that information. They should be treated as adults and not just victims of “rumor damage” by people with a knee-jerk aversion to media culture.

This entry was posted in Media and tagged Fukushima Prefecture, International Physicians for the Prevention of Nuclear War, New York Times. Bookmark the permalink.