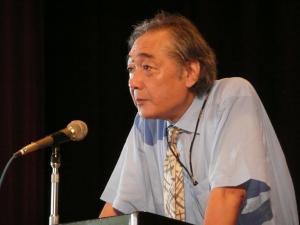 Here’s this week’s Media Mix, which discusses that controversial Shukan Asahi article about Osaka Mayor Toru Hashimoto. As mentioned in the column, the different name for the mayor used in the title of the article, “Hashishita,” is an alternate reading of the kanji that form “Hashimoto.” Nowhere in the article, however, does the author, Shinichi Sano, mention his reason for using this alternate reading, which only appears in the title. Of course, if any Japanese person who didn’t know Hashimoto just saw his name printed they would undoubtedly pronounce it as “hashishita,” but some commentators have said that Sano’s use of the alternate reading has a loaded meaning. “Hashishita” literally means “under the bridge,” which is where many homeless people live, thus subtly reinforcing the notion that Hashimoto’s background was impoverished. It could also be an allusion to the famous novel by Sue Sumii, Hashi no Nai Kawa (The River Without a Bridge), which is about burakumin, the untouchable caste. Two people in the article suggest that Hashimoto’s father belonged to this caste.

In any event, Sano doesn’t elaborate, which points up another unfortunate outcome of Asahi cancelling the series: We’ll never know what Sano’s real purposes were for the series. The reporter himself has been silent on the matter, telling Mainichi Shimbun that he won’t comment on the controversy now but may do so later “through media I trust.” He himself has not apologized for the story and it seems he wasn’t asked to do so, at least not by Shukan Asahi, which took complete responsibility for it. Normally, this sort of falling-on-sword statement is standard operating procedure when a media outlet has to apologize to some offended party—the editor-in-chief of Shukan Asahi has since stepped down—but certain aspects of the article indicate that maybe Asahi is more responsible than Sano. For all we know, the idea of using “Hashishita” in the title may not have been Sano’s in the first place. Usually editors reserve the right to compose their own headlines for feature articles like this. Also, two staff writers contributed to the article in ways unspecified. My partner, who has read some of Sano’s other writing, says this article is uncharacteristic of his style, thus hinting at the possibility that the piece’s somewhat down-to-earth, pugnacious tone was engineered by the magazine to make it more topical and edgy. I mentioned in the column that personality profiles of politicians are fairly common. They certainly are in the West, but even in Japan you can find them, especially in the left-leaning Shukan Kinyobi. But Kinyobi’s tone is more “professional,” almost scholarly. The Shuka Asahi article is clearly written for the average reader, which is why it may come across as being too personal, too grudging. That tone may have been emphasized in the article through editing because it was the first in a series, and thus meant to get the reader to want to purchase the rest of the series. In condemning Asahi, Hashimoto said the company would probably end up “making even more money” thanks to the controversy, which may be true but not as much money as it could have made if it had continued the series.

Still, the feeling is strong that Hashimoto has it in for Asahi in particular. The magazine So has pointed out that in the past two other weekly magazines, Shincho and Bunshun, specified burakumin communities in articles, the action that Asahi mainly apologized for, and they received no flack at all. In fact, one of the articles won some sort of journalism award. It just goes to show that nothing’s really taboo until you offend the right people.