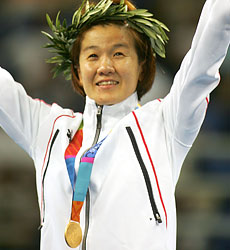 Here’s this week’s Media Mix about the judo scandal. Central to the issue, as far as the media is concerned, is judo’s relationship to the Olympics. In the column I say that organized judo is nothing without the Olympics, a provocatively hyperbolic statement meant to focus attention on the single-mindedness of athletic endeavor in Japan. Last week when the IOC announced it would likely do away with wrestling for the 2020 games, the reaction was apoplectic. Young wrestlers who would presumably reach competitive capability for those games despaired that their lives no longer have meaning. The Olympics is the only event that gives them purpose. The sport itself is obviously not enough, so the natural question you ask yourself is: What is the real purpose of sports? To certain athletes it is a career, preferably a professional one that allows them to sharpen their skills while making money until those skills are no longer marketable, at which point they’ve either made enough money to retire comfortably, embark on an adjunct career in sports, like announcing, or retreat into a job that has nothing to do with sports. Until, say, thirty years ago, this third possibility was hardly considered a disgrace simply because it was by far the most likely. Just as very, very few athletes make it as a professional, very, very few professional athletes grow rich enough to retire when their bodies give out or find subsequent work in their particular sport (coaching, administration, whatever). The professional life of an athlete is short by definition. The Olympics is the be-all-end-all for amateur athletes, the means of extending one’s “career” in sports beyond its natural sell-by date. With the exception of participants in non-strenuous events, like shooting or equestrianism, most Olympic athletes are not expected to continue pursuing medals after their university years. Think of Mark Spitz. He was the most decorated Olympian up until only a few years ago, an achievement no one could take away from him, but after college he became a dentist and never swam again competitively. These days, the Mark Spitzes of the world keep swimming as long as humanly and economically possible, making a career out of being an Olympian. What was once the culminating recognition of an adolescent’s love of a sport has become an end in itself–and beyond. In Japan, the media plays up this aspect of Olympic ambition by turning medalists and potential medalists into media stars outside their specific sports, and at the same time they continue to participate in the Olympics. Ryoko Tani, Japan’s most beloved judoka, became a politician in a perverse inversion of the normal celebrity dynamic. Usually, public office is a career capper for a person who became famous in some other capacity, but in Tani’s case it was merely a means of keeping her in the public eye. Her real goal seems to be to continue competing at Olympics until she’s a grandmother, a goal that was effectively stymied at London, when she didn’t make the team despite everyone’s expectation that she would. Thankfully, individuals in the IOC and/or the All Japan Judo Federation realized what it would look like to once again give Tani a pass to the Games based solely on her ability to attract attention; but that’s what the Olympics is about anyway. It’s gone beyond the culmination thing. The Olympics, like a celebrated career in professional sports, can guarantee for a lucky few a lifetime of celebrity livelihood. Twenty years ago, you never saw Olympic athletes as TV talent. Now, they are practically ubiquitous as such. Even during the four-year layoffs between games, they appear on countless variety shows with nothing to offer but the glow of accomplishment in an endeavor whose only value to observers is the opportunity to see exceptional athletic talent. For the amateur athlete the Olympics is no longer the be-all-end-all. It’s the path to show biz.

This entry was posted in Media and tagged judo, Olympic Games, Ryoko Tani. Bookmark the permalink.