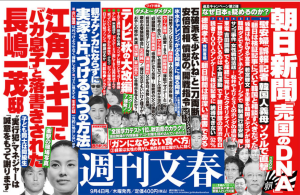 Here’s this week’s Media Mix about the media’s reaction to Asahi Shimbun’s retraction of its comfort women reporting in the 1980s and 90s. Though I point out how right-leaning publications have used the retraction to their own advantage and offer some balancing commentary from left-leaning publications, the main point is that the “pile-on,” as my editor so colorfully put it in the header, may have more to do with economics and competition than it does with ideology. But ideology shouldn’t be discounted. One aspect I didn’t explore fully is the gradual drift over the years away from the center, though some commentators think there was never any drift; that Asahi has always been a staunchly left-of-center newspaper and Sankei a much farther right-of-center one. The point is that overt political positions are now seen as a means of cultivating a broader base for the more conservative media with the re-ascendance of the LDP in the past few years. In Masaru Sato’s Flash article, which I reference in the column, he says that newspaper reporters “unconsciously” write articles that fit their respective bosses’ stance in order to gain approval, regardless of their own predelictions. This isn’t to say they are lying or misleading readers, only that they will likely lean right or left in accordance with their employer’s position. This isn’t always true. The Asahi’s reporting on the collective self-defense issue could be seen as contradicting the paper’s editorial position, which is suspicious of the Abe constitutional end run; while the nominally right-wing Yomiuri and Nikkei have come out strictly against politicians visiting Yasukuni Shrine, mainly for pragmatic reasons. What Sato wants to say is that when a publication sees an opening, such as the one offered by the Asahi with its retraction, rivals will rush through it recklessly because of the sensationalist points they can score. It’s been well documented that publications that consistently run negative articles about South Korea seem to sell well, which is why so many print such articles. Does that mean the general public is reactionary by nature? Not necessarily, but it seems to be a universal truth that right-leaning forces tend to be louder in the media in pursuit of their ends than left-leaning forces are. Sensationalism is its own reward.

There is one aspect of the criticism that foreign reporters may find problematic beyond its ideological tenor, and that is the way that criticism uses journalistic integrity as its main justification. All these publications characterize Asahi’s irresponsible reporting as a sin of the highest magnitude since the paper resisted the evidence for so long. In a “normal” media environment such a complaint would have weight, but in Japan it comes across as hyperbole because journalistic conventions aren’t held up to the same specific standards. Even among the articles I cited in the column, whether from the left or the right, almost all the sources are anonymous and there is little proof that assertions were corroborated. The template for reporting in Japan is simply vaguer around the margins, so any complaint by one media about another’s journalistic integrity is automatically less convincing. This is especially true when it comes to tabloids and weeklies, who, as Sato implied (writing for a weekly, it should be noted), come up with their conclusions first and then carry out information-gathering to support those conclusions. It doesn’t take a huge leap of imagination the think that these same publications willfully bend that information to their own needs. If your purpose is to bring down the Asahi, then, as Malcolm X used to say about a very different sort of conflict, you use any means necessary.

This entry was posted in Media and tagged Asahi Shimbun, Flash, Sankei Shimbun. Bookmark the permalink.