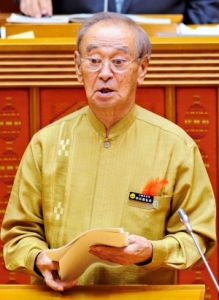 Here’s this week’s Media Mix, about the difference between the Tokyo media and the Okinawan media when it comes to reporting the Henoko base issue. As pointed out by the people who discussed the matter on DemocraTV, the mainland press approaches the matter with a set of assumptions that are patronizing, and which are best represented by a remark that was made by former Okinawa governor Hirokazu Nakaima in December 2013 when the central government approved a larger than expected stimulus package for the prefecture, presumably in exchange for Nakaima’s abandoning his opposition to construction of the new base, which he soon did. At the time, a clearly elated Nakaima said, “I think we will have a good New Year’s Day,” as if speaking for all Okinawans.

That line was often quoted during the election campaign last fall by Nakaima’s opponent, who cited it as proof of the governor’s disregard for his constituents, since it implied that all Okinawans cared about was money, and for sure, the mainland media used the quote often over the past year or so to reinforce its own belief that Okinawans are too dependent on the central government to be in a position to refuse anything the U.S. military asks for. Takeshi Onaga’s clear victory over Nakaima in the election was as strong a rebuke of this belief as anything, and one Onaga supporter reversed the meme by saying to a reporter that the election itself was a great “New Year’s gift” for Okinawa, though, as with all such pronouncements, nobody in Tokyo seemed to be paying attention.

This entry was posted in Media and tagged Henoko, Hirokazu Nakaima, Okinawa. Bookmark the permalink.