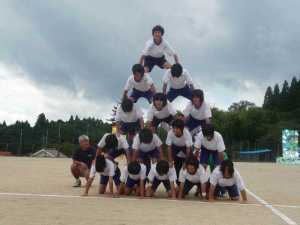 Build it and they will come

Here’s this week’s Media Mix about changing attitudes toward school athletics. If there’s a central theme to the piece, it’s probably the idea that sports is all about appearances. It’s not a novel or original idea, but it is one that runs counter to our ideal of what sports represents. “Performance” is a malleable word, but what school sports has become in Japan–maybe even the world–is a kind of contract between athlete and observer. As sports fans we evaluate the performances of players both as individuals and as members of teams, and those evaluations eventually have meaning. At the end of the column I cite survey results that say many adults didn’t really enjoy playing sports until after they leave school, which implies that the pressure to “perform” diminished the essence of sport, i.e., competing physically with others as well as with one’s own capacity. Take away the observer, the fan, and sports comes closer to this essence. Many athletes, especially those who make a living from sports, will say there’s no difference, that they would “perform” the same way whether there was an audience or not. If you’re going to play a sport, you should play it well. But that reasoning only makes sense in a world where sports is viewed primarily as entertainment. Sure, when you play you want to do your best for your team, if not for your own self-regard, but without a critical gaze it has no social value.

Thus the cultivation of “spirit,” though ostensibly an endeavor that benefits the individual and the team, is really a means of enhancing performance in the entertainment sense of the word. The athlete must be seen to be suffering, to be working beyond his or her innate capabilities. So high school pitchers keep throwing the full nine innings, even if their arms are giving out. In one of the Asahi articles, Prof. Sakaue says that sports in other countries is treated “as a kind of culture,” implying that it isn’t thought of that way in Japan. I’m not really sure what he’s trying to say, though I think he means that sports in Japan is a function of social engineering, which seems to me an over-simplification. One of the hoariest cliches attached to athletics is the dynamic between enjoyment and winning, as if the relationship between the two were inviolable. In Japan, the dynamic is broader: it’s not between enjoyment and winning, it’s between pain and performance. You will perform better if you go through a lot of pain beforehand. This is, of course, a stereotype, which is probably why people are starting to question the significance of athletics in the educational process.

This entry was posted in Media and tagged kumitaiso, school sports. Bookmark the permalink.