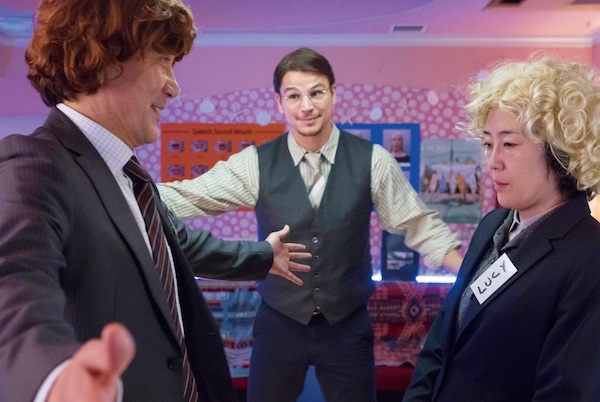 Atsuko Hirayanagi explores familiar screwball archetypes in her debut feature, and while most have been well presented by other Japanese directors, they’ve never attempted them in a cross-cultural setting. Setsuko (Shinobu Terajima) is an uptight, lonely single woman working a deadend OL job in Tokyo and living in a frightfully messy apartment. She seems this close to self-annihilating breakdown when her saucy niece (Shioli Kutsuna) talks her into signing up for English lessons with her teacher, an earnest American named John (Josh Hartnett). With a pedagogic style that uses hugs and wigs to fortify the role play endemic to Japanese language learning, John wins Setsuko over, and she becomes enamored of not only her new persona, Lucy, but John himself. When he suddenly leaves Japan with her niece in tow, she is eager to join her annoyed sister (Kaho Minami) on the California journey to find them. There, the movie opens up in startling ways and you appreciate not only Hirayanagi’s astute understanding of American differences, but also Terashima’s empathy with an inherently unlikable character. (95 min.)
In Japanese and English.
Now playing, Euro Space, Shibuya (03-3461-0211) May 17, 6:50 p.m. Euro Space screening will have English subtitles, Theatre Shinjuku (03-3352-1846). Photo (c) Oh Lucy LLC

This entry was posted in Movies and tagged Josh Hartnett, Shinobu Terajima. Bookmark the permalink.