Review: You Were Never Really Here 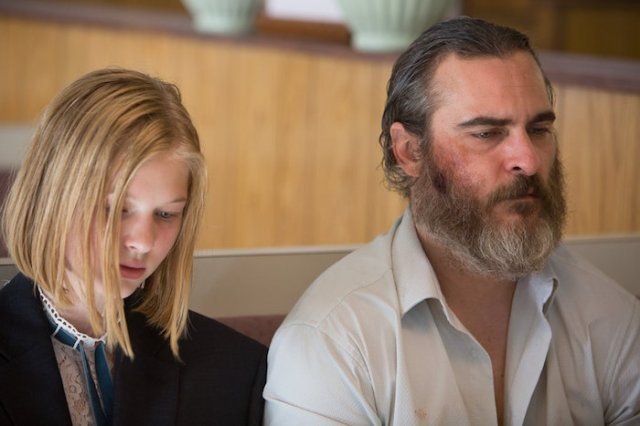 It’s difficult to grasp what director Lynne Ramsay is trying to accomplish with her new movie. Ostensibly a genre exercise, You Were Never Really Here sketchily outlines the daily grind of a hit man, Joe (Joaquin Phoenix), who specializes in rescuing young girls from the clutches of kidnappers and other bottom feeders. Joe suffers from some form of PTSD that seems to be a combination of battle fatigue and his own early childhood trauma, and Phoenix plays him as a sullen misanthrope who occasionally bursts into uncontrollable tears, but not necessarily because of his bloody work. Ramsay’s style here is similar to that which made her 2001 feature, Morvern Caller, an indie sensation: Smudgy cinematography and random edits that recreate a druggy sensibility. This made sense in Morvern because the protagonist was living a lie that she couldn’t credibly keep up with. With Joe the charged atmospherics are a literal representation of his mindset, and in the end they only work against the trite hit-man arc of the plot.

Though the movie delves into extraneous character development–Joe’s queasy relationship with his damaged mother (Judith Roberts), his bizarre addiction to jelly beans–it eventually has to fulfill its genre obligations, and Ramsay doesn’t seem to be invested enough in the particulars of building a thriller. Joe is dispatched to save a girl (Ekaterina Samsonov) from what seems to be a cabal of pedophile politicians. The implication that such a group exists brings up all sorts of questions that deserve an answer before we can even begin to believe Joe’s reckless methodology in carrying out his contract. For one thing, Joe’s weapon of choice is a simple hammer, and while Ramsay doesn’t really show him using it, she does reveal the aftermath of his violence. It’s hard to see this devisce as being anything other than gratuitous.

The only really effective result of all this careful visual manipulation—some critics have called You Were Never Really Here essentially the final section of Taxi Driver drawn out to feature length—is Phoenix’s portrayal of a naturalistic brute. When he does fly into action, with his bulked-up action moves and hysterical expression, you immediately realize how vacant the assassin genre is normally. There really is no such thing as the cool-as-ice killer, so if Ramsay deserves any credit for giving us one more pointless addition to an already overstuffed film trope it is to show the genre’s bankruptcy as anything other than a form of exploitative entertainment, but I’m not sure if that’s a good enough reason to make this movie.

You Were Never Really Here home page in Japanese

This entry was posted in Movies and tagged Joaquin Phoenix, Lynne Ramsay. Bookmark the permalink.