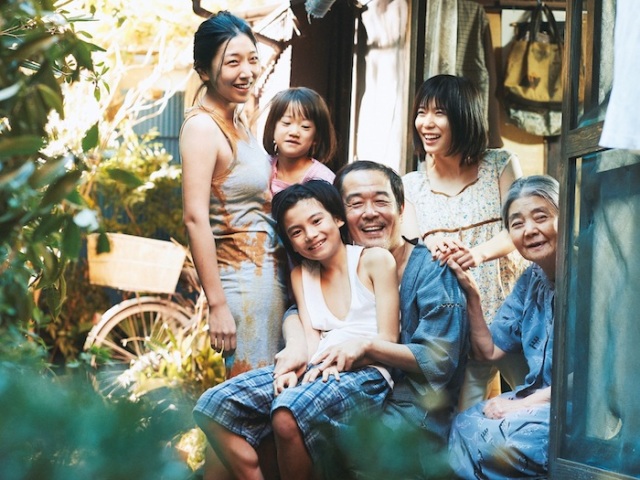 It will be interesting to see the reaction in Japan to Hirokazu Kore-eda’s latest film, which won the Palme d’Or at Cannes last month. Though Kore-eda has tackled socially relevant topics in the past, most notably in his 2004 shocker Nobody Knows, Shoplifters seems to have hit a sore spot with certain fellow countrymen who probably have no intention of ever seeing it, thinking it reflects badly on Japan while winning a prestigious award overseas and being sold to 149 countries. These public personalities, including bestselling novelist Naoki Hyakuta and celebrity plastic surgeon Katsuya Takasu, claim to speak for Japan when they say the movie, which is about impoverished people who resort to petty crimes to get by, sends the wrong message about Japan and Japanese people. During a post-screening press conference at the Foreign Correspondents Club of Japan, the director didn’t address these claims directly, but suggested instead that he had no particular reason for choosing this theme except that he found it dramatically interesting. If the movie comes off as being “political,” meaning that it appears to criticize social policies that have resulted in abject poverty, that is more like a function of the viewer’s take on the subject. If anything, Shoplifters is a work of empathy rather than one of outrage or polemics—more Mike Leigh than Ken Loach. In fact, if the naysayers swallowed their bile and sat down and watched it, they’d probably realize that, in its own way, it paints the Japanese family in the kind of colors they would normally approve of. Their problem is that they aren’t going to accept the social unit on display as a “family” in the first place.

And that, really, is the most subversive thing about Shoplifters. Though the story develops in a satisfying way it doesn’t have a plot in the traditional sense. It’s obvious early on that the six members of the household in question are not related to one another by blood, but rather by convenience and, maybe, the stars. The elderly matriarch, Hatsue (Kirin Kiki), is drawing two pensions, one hers, the other her late husband’s, a setup that’s legally dodgy. She also receives infusions of cash from the children of her husband’s mistress. Osamu (Lily Franky) is the man of the house by default. He earns a living as a day laborer until he gets injured on the job, but his main skill is shoplifting, which he passes on to preadolescent Shota (Jyo Kairi), who fulfills the role of “son” though obviously he is not the offspring of Osamu and his common law wife, Nobuyo (Sakura Ando), who works at an industrial dry cleaners. Even vaguer is their relationship to college age Aki (Mayu Matsuoka), who at times seems to be Nobuyo’s sister, though she could also be the only person in the house who has a legal relationship to Hatsue. Rounding out this den of thieves is Rin (Miyu Sasaki), a preschooler whom Osamu and Shota discover one evening freezing alone in a shack. They bring her home and essentially adopt her even though she has parents, albeit ones who abuse her.

Kore-eda’s peculiar genius is setting the viewer up for an emotional fall they don’t see coming. Though Hatsue’s home is a ramshackle disaster and the economic day-to-day of the family’s existence is always on the brink of collapse, they are portrayed as a happy lot—dedicated to one another’s well-being and fairly comfortable in terms of material want, and not just because of the stealing. There are actually few scenes involving shoplifting, and Shota’s growing unease with this avocation is as close as the movie gets during its first two-thirds to a conventional conscience. The isolated sequences showing happy times—the whole family enjoying a day at the beach, Osamu and Nobuyo having a rare sexual interlude—are injected into the proceeds so delicately that you are caught offguard when the inevitable reckoning comes. Kore-eda is too good a narrative filmmaker to present this reckoning as a kind of zero sum outcome, mainly because we learn truths about the family that are genuinely shocking. That the effects this reckoning has on the family are not equitably felt by the individual members is perhaps Kore-eda’s most brilliant sop to reality and, thus, the closest he comes to criticizing the Japanese status quo. On the other hand, the director’s tendency to treat his script as a survey of the issue of widening class divisions means that he sacrifices depth for topicality. He admitted at the FCCJ that he had based some scenes on things he had read about, and there’s a piecemeal quality to the story that suggests a close reading of tabloids and weekly magazines over the last year. Aki, for instance, makes her living dressing up as a schoolgirl and “performing” sexualized acts behind glass for faceless patrons, a situation that isn’t developed into anything meaningful but simply adds another familiar headline-derived aspect to the proceedings.

The only reaction I can see being uniform across the board would be the one to Sakura Ando’s performance. By the end it’s clear that Nobuyo is the rock that this household was built on, but Ando maintains such a carefree demeanor that the viewer misses much of Nobuyo’s strength as a character—until that reckoning comes and she is forced to own up to her responsibilities despite the devastation it brings. As in Nobody Knows, Kore-eda holds nothing back with regards to the viewer’s feelings for people who live on the margin, but it’s Ando who has to show the price they pay for being too casual about such a life, and she nails it in several late scenes, where she has to face what she’s actually done. If the naysayers could just move beyond their reflexive defensiveness and try to understand a complicated human being like Nobuyo, they might come around to the notion that she’s the best apologist for the “Japanese family” they could ask for.

*A print with English subtitles will be shown daily starting June 23 at Shinjuku Wald 9.

**A print with English subtitles will be shown on June 21 at Toho Cinemas Roppongi Hills followed by a talk show with the director. More information.