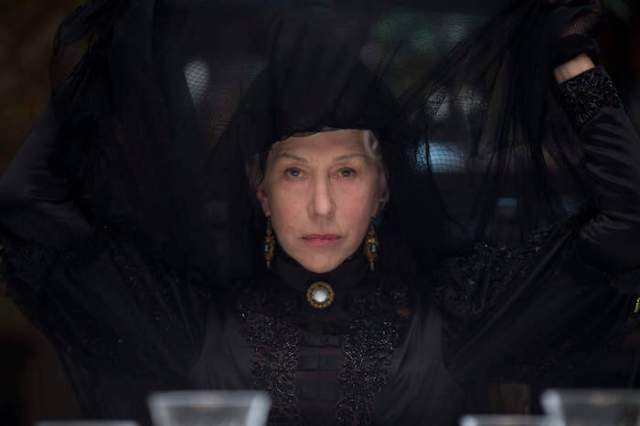 During the horror film’s formative heyday in the 80s, trashiness was next to godliness. Perhaps by necessity, the gory goings-on were delivered via hilariously ridiculous plots that were gentle on whatever degree of intelligence was brought to the proceedings. Even a fairly sophisticated shocker like Dressed to Kill was, at base, a comedy.

Nowadays, it’s more difficult to tell if the brainlessness on display is purposeful or not. For one thing, in their bid to make the gore and shocks gorier and more shocking than the last guy’s, directors now lose track of the tone of the film and you get a blockbuster like It, which is fairly serious in terms of story and theme, but those aspects are then completely overwhelmed by the scare dynamics. Balance has been lost, but I have yet to see either Hereditary or A Quiet Place.

Winchester‘s problems as both a horror movie and a movie is that the brother directors, Michael and Peter Spierig, can’t decide which kind they’re making. Based loosely on the story of Sarah Winchester (Helen Mirren), the heiress to the Winchester rifle fortune whose San Jose mansion was said to be haunted by the victims of her family’s product in the days leading up to the San Francisco earthquake of 1906, the script parries with ideas related to gun control, certainly a topic that will connect to a lot of viewers these days, but mostly it has to do with guilt of another sort. The protagonist is not Winchester but rather Dr. Eric Price (Jason Clarke), the psychiatrist charged with figuring out whether Mrs. Winchester’s belief in ghosts is the result of an addled mind. Price, however, has his own demons, which mostly spring from his addiction to laudanum but include remorse over a dead wife. In any case, Price takes the job not because he thinks it has merit, but because he needs the money, and is further challenged when Winchester’s lawyer demand he live at the mansion during the treatment and lay off the drugs and booze. So while the spooks keep spooking after his arrival, it’s difficult to tell if they are nominally real or the figment of Price’s withdrawal-affected imagination.

All of these elements point to a relatively serious study of psychological self-delusion, but in the end the Spierigs opt for fun house horrors and a storyline that eventually falls off the deep end in terms of silliness. Though at one point, somebody says “the rifle never discriminates,” the movie never really addresses America’s own addiction to gun-related violence; and the twin hallucinatory problems of the principals are not resolved in ways that make them thought-provoking. The only thing that makes a suitable impression is the production design: What a waste of a genuinely unsettling haunted house.

This entry was posted in Movies and tagged Helen Mirren. Bookmark the permalink.