Posted on August 9, 2018 by philipbrasor 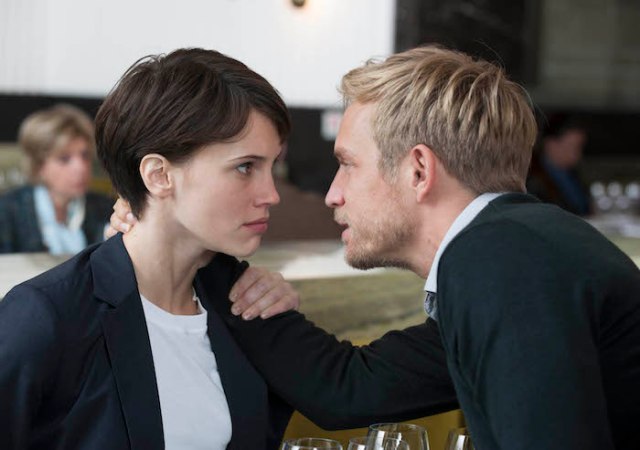 Though Francois Ozon has made an enviable reputation for himself by being both prolific and consistently engaging, his best movies are throwbacks to enduring styles that have never really benefited from being updated. Double Lover falls into this category. It’s the kind of psychological thriller that Hitchcock not only invented in cinematic terms but seemed to have perfected before anyone else tried to recreate it. Though relatively free of shock value and suspense, the movie nevertheless casts a queasy spell that lasts well after the lights go up.

Twentyish Chloe (Marine Vacth) suffers from chronic stomach discomfort that her doctor can’t diagnose and thus suspects it may be psychosomatic. She refers the young woman to a therapist, Paul (Jeremie Renier), with whom she falls into a passionate love affair almost too quickly. Ozon’s voyeuristic tendencies tend to be one of the sticking points for critics who have never been on board with his lush visual preferences, and the sex and nudity here seems almost provocatively gratuitous until you realize it’s a means of making the viewer question the reality of either Chloe’s viewpoint or Paul’s. The answer comes, again, almost too quickly, when, after Chloe and Paul move in together, she looks through some of his stuff and finds items that would seem to indicate he once had a different name. Consequently, she starts seeing Paul in unexpected places, sometimes with other women. She becomes sensitive to his schedule, and wonders if he is living a double life. The truth, or, at least, the truth as far as Chloe perceives it, is even more disturbing. When Paul recommends that Chloe go to a different therapist because he doesn’t think he can properly treat her and be her lover at the same time, she seeks out the “other” Paul, who is also a therapist named Louis. But whereas Paul is considerate and even gentle in his lovemaking, Louis is aggressive and somewhat scary. Louis claims to be Paul’s twin brother, though Paul has said he has no siblings.

As titillating as Double Lover often is, it doesn’t quite deliver the transgressive excitement of other Ozon pastiches, and certainly isn’t as startling as some of his purely idiosyncratic works, like Swimming Pool or Under the Sand. You don’t have to be an amateur sleuth or psychologist to see where the film is going and there isn’t much of a buildup to the climax. You sort of watch just so you can find out if your hunch is correct. Still, the movie is crackerjack entertainment, a visually rich hall of mirrors with preternaturally attractive people and eye-catching production design. It’s one of the few movies I’ve ever seen where I actually envied the person suffering what appears to be a gradual nervous breakdown.

This entry was posted in Movies and tagged Francois Ozon. Bookmark the permalink.