Posted on September 14, 2018 by philipbrasor

I recently realized that almost all of the movie reviews I wrote for the Asahi Shimbun in the 90s and early 00s are not available on the Internet, so I will remedy that by slowly, methodically posting them here on my blog. I have not edited these, so all the prejudices and dumb assessments remain. Enjoy. 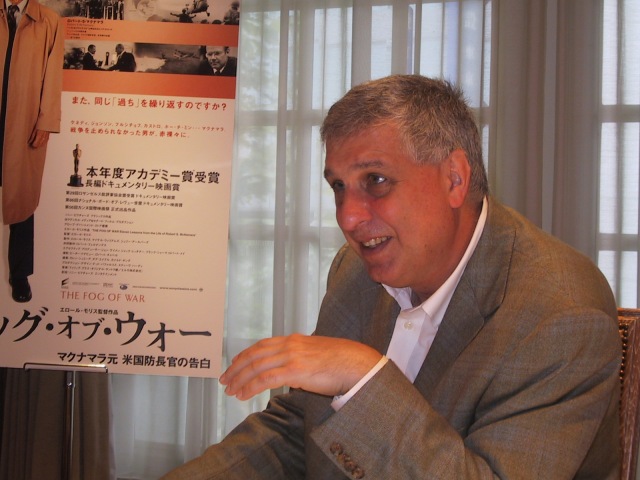 For much of this summer, the war that has been the main source of contention in the U.S. presidential campaign has not been the present one in Iraq but rather the old one in Vietnam. John Kerry’s reputation as a war hero and George Bush’s service in the National Guard during that conflict has each been questioned by the opposing camp, thus reigniting a debate over the rightness of the war itself.

Inflaming the debate is Errol Morris’s Academy Award-winning documentary, The Fog of War, a feature-length interview with the “architect” of the Vietnam War, Robert S. McNamara, who was Secretary of Defense in the Kennedy and Johnson administrations. For the past 30 years, McNamara has been explaining the “mistake” of Vietnam without really owning up to his responsibility for it. Morris’s film is, in part, a means of putting the 88-year-old McNamara on the spot, and though he won’t accept blame, he reveals a great deal about the mindset that causes war, not to mention the fallibility of “intelligence” in every sense of the word.

Morris, who was in Tokyo this week to promote the film, protested against the Vietnam War as a student but doesn’t care for the term “antiwar film.” “Most antiwar films tell you that war is bad,” the American filmmaker says, sipping coffee in a Ginza hotel, “which is hard to argue with. This movie does something different. It’s about how war is created. How we deceive ourselves about the nature of what we’re doing.”

McNamara is the perfect guide. Before Vietnam, he was in the thick of the 1962 Cuban Missile Crisis and during World War II was a U.S. army air corps captain in the Pacific Theatre. One of his jobs, as he chillingly explains, was crunching numbers to justify the firebombing of Japan from the standpoint of “efficacy.”

The explanation of this work shocked even Morris. McNamara admits that what he did under Gen. Curtis Lemay, who ordered the bombing, would qualify him as a war criminal if the U.S. had lost. “The firebombing of Tokyo was something I’d heard about,” says Morris, “but I didn’t know there were 66 other cities [bombed]. Lemay’s air force burned Japan to the ground. It’s very important, because it frames that whole debate over the use of atomic weapons [on Hiroshima and Nagasaki]. We had destroyed Japan already before we dropped the two nuclear bombs.”

McNamara, whom Morris calls “one of the world’s great control freaks,” is a charming raconteur, and except for an occasional clarifying offscreen question from the director, his voice is the only one we hear in the movie, which was edited down from 20 hours of filmed interviews and augmented with archival footage, taped conversations, and passages from declassified documents (not to mention Philip Glass’s haunting score). “It’s impossible to put ourselves back in that position,” he says apropos the arms race and the Cold War, and thus lectures from a protective bubble of hindsight. But despite his expository skills in melding the practical and the theoretical, he comes across as a sentimentalist, albeit one who sheds more tears over JFK (he claims to have picked out the slain president’s final resting place) than over the Asian victims of his ideas.

Understandably, he didn’t react positively to the final movie. “He didn’t like my lessons,” Morris says, referring to the “Eleven Lessons” that act as the film’s framing device, even though Morris gleaned them from McNamara’s own words. “They were something I put into the movie shortly before it was finished. German and Swiss reviewers pointed out something that’s rarely pointed out in the U.S.: The lessons are ironic. The eleventh lesson, ‘You can’t change human nature,’ tells us that all the previous lessons are for naught. It’s very nice to ‘Get the data,’ but what if the data is all wrong? It’s very nice to ‘Maximize efficiency,’ but what if you’re maximizing efficiency in the cause of slaughtering people?”

McNamara comes off as the product of a particular time and culture. He was the epitome of “the best and the brightest” in American business and academia that Kennedy tapped when he became president. He will go down in history as the man who introduced strategic bombing to the vocabulary of war and as the man who invented the seatbelt.

“You can blame Harvard Business School or the postwar meritocracy that produced this managerial class,” says Morris. “But at the bottom of it all is garden variety human stupidity and self-deception.”

That, in Morris’s opinion, is the connection between the War in Vietnam and the War in Iraq, though the movie was never meant as a comment on specific current realities. The interviews began before 9/11, but as the movie took shape it became “hideously relevant.” In the process it changed the filmmaker as well.

“I’m not a political guy,” he says, but since working on the movie he has found himself “involved in politics.” Morris’s documentaries usually focus on eccentric people and true-life dramas, and he earns a living making commercials. However, he recently produced a series of 30-second TV spots for the anti-Bush NGO MoveOn.org in which he interviews Americans who voted for the president in 1990 but will not do so this November. The spots were produced not to advance an agenda but rather “in a spirit of inquiry,” much like The Fog of War.

“The nicest thing that anyone said about the movie is that it makes history relevant to a younger generation,” he says. “It tells people why they should bother with history, and what history has to tell us about us, which is that we should be damn careful when we claim to have certain knowledge about anything.”

This entry was posted in Movies and tagged Errol Morris, Robert McNamara. Bookmark the permalink.