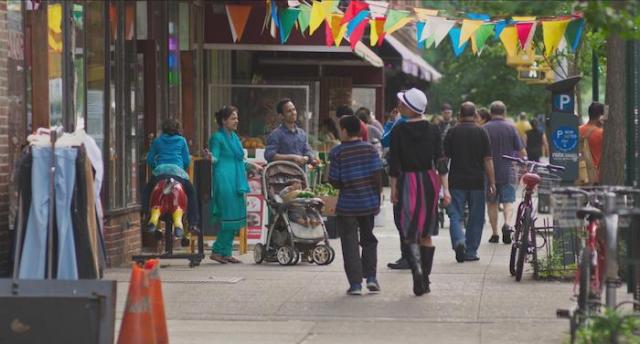 Jackson Heights, located in the western part of Queens and serviced by numerous subway and bus lines, has been called the most ethnically diverse neighborhood in the world. Add to this legend the fact that it was the first place in New York City to launch an annual Gay Pride parade in the wake of the murder of a gay Latino man, and you’ve pretty much got the reason for why Frederick Wiseman spent the better part of 2014 patrolling the streets, hanging out at community meetings, and visiting the myriad small businesses that service the area. In Jackson Heights runs more than three hours, and yet you get the feeling that Wiseman only scratched the surface. His main concerns are commerce and ethnic dignity. He loves just pointing his camera at store fronts and dropping into nail salons, tattoo parlors, and gay bars just to see what’s going on. He also spends a lot of time with a group of Spanish-speaking business owners trying to come up with a strategy in their battle against developers who are finally targeting the neighborhood because it seems to be the last low-rent but vital commercial stronghold in not only New York City, but the whole New York metropolitan area. These confabs are fascinating in the way they not only explain what these people are up against, but also their philosophy about making business something that gives as much to the community as it takes.

Wiseman tries to be an equal opportunity documentarian. In addition to copious footage of Spanish-speaking residents—Colombians, Mexicans, Dominicans, Venezuelans, all of whom are caught up in World Cup fever as it unfolds over the summer—he visits mosques and Arabic classes to get a flavor of Jackson Heights’ Muslim population, sits in on a funny cram school for mostly Indian and Pakistani would-be cabbies, and pops in on a butcher shop that slaughters live chickens for halal food. He also spends a lot of time in the company of city councilman Daniel Dromm, a gay man who we see plotting a school redistricting fight and feting the “mayor” of Jackson Heights at a coffee shop filled with randy senior citizens. The LGBT constituency is particularly vital, what with transgender self-help groups carrying on in several different languages, and Mayor Bill De Blasio starting the aforementioned Pride Parade, the first time a sitting NYC mayor has done such a thing.

As usual, Wiseman’s style is peripatetic, but he keeps circling back to the area’s Jewish Community Center, which seems to have been a sanctuary not only for the gay community back in the late 70s and 80s (a group of gay seniors are seen discussing whether or not to move to their own venue and deciding the synagogue has been too good to them) but also for immigrant groups. Elderly Jewish women bemoan their longevity in the halls and cafeterias, and a Holocaust memorial service is juxtaposed against a Catholic mass aimed at undocumented Latinos. Even the Alabama-bred Christian missionaries who proselytize on the street seem to belong somehow. Though the film was shot during the Obama era, it’s subtext about the inherent rightness of inclusiveness—not only in terms of moral integrity, but economic and social efficacy—seems particularly pointed in during the Trump takeover. A film of the moment if ever there was one.

This entry was posted in Movies and tagged Frederick Wiseman. Bookmark the permalink.