Posted on November 2, 2018 by philipbrasor 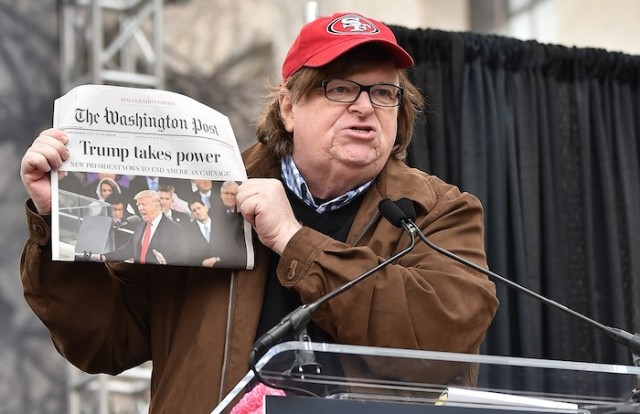 The pleasures and edifications of Michael Moore’s latest broadside attack on the power elite comprise more of a mixed bag than any of his previous polemics, which tended to focus on a specific, albeit broadly characterized, subject matter. Though Donald Trump is the ostensible target, Moore ranges far and wide to explain the forces that he thinks conspired to get Trump elected, taking in everything from establishment Democrats to the mass media and even Gwen Stefani. And while Moore’s explications don’t always stand up to rigorous scrutiny as journalism, there’s less of his patented working-guy-confrontation shtick, which had been getting old more than a decade ago, and it makes all the difference in the world.

That isn’t to say the movie doesn’t have it’s humorous moments. Anything having to do with Trump must by necessity trade in the ridiculous, and Moore has a field day with the president’s TV career, his queasy regard for his daughter, and, most tellingly, the theory that he never wanted to be president in the first place. The timing of the doc’s release is meant to coincide with the midterm elections in the U.S., which suggests that the movie will be dated by Christmastime. However, I have a feeling that Fahrenheit 11/9 will probably be Moore’s most enduring film if for no other reason than the way he incorporates the tragedy of his hometown of Flint, Michigan, into the overall anti-Trump narrative.

As most people know, Flint has been suffering from a drinking water crisis for almost half a decade owing to the venal policies of the state’s Republican governor, Rick Snyder. Moore describes the scandal with a mix of disgust and profound sadness, since Flint was already one of the most depressed cities in America owing to its loss off jobs when various car companies and their suppliers closed their factories. Moore is able to get to the heart of the tragedy simply by being Moore, a native whom more people trust than they do the authorities. Though the idea that Trump learned everything he needed to know about dishonest politicking from Snyder at first seems a stretch, by the end of the film—after Moore reveals the pinnacle of the tragedy, when President Obama came to Flint and basically sidestepped his own responsibility—it’s a credible story if only because the kind of venality that Snyder and Trump share is so inescapable.

Beyond the Flint analogy, which he weaves in an out of the doc with the facility of an automated loom, Moore tackles the Florida school shootings, the democratic socialist movement, the rise of American fascism, and racism. The scattershot approach only hits its marks on occasion, but the quickness of the editing, the fluency of the prosaic narration, and the inventiveness of the images is never less than exhilirating. Persons of a more critical mien will accuse Moore of playing fast and loose with facts by dazzling the viewer with his accomplished filmmaking chops, but any intelligent person—and Moore always treats his audience with respect, to the point of owning up to his own past failures—will be able to take away what they need from this overstuffed documentary, and I predict they’ll take away a lot.

This entry was posted in Movies and tagged Donald Trump, Michael Moore. Bookmark the permalink.