Posted on February 4, 2019 by philipbrasor 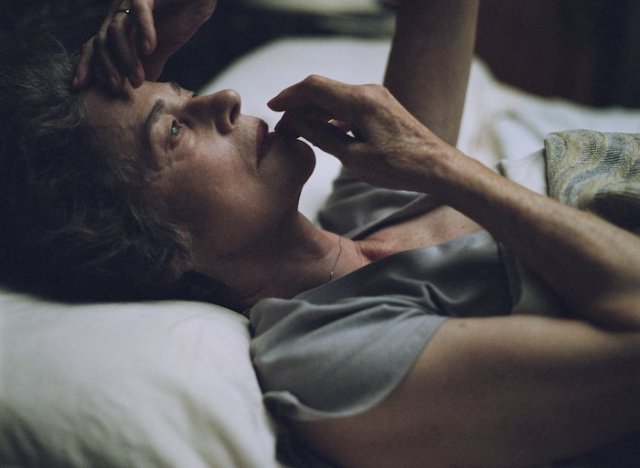 Thematically and structurally similar to 45 Years, which also starred Charlotte Rampling as the wife of a man who undergoes a startling change in situation, Andrea Pallaoro’s heavily circumscribed character study is less emotionally involving but more evocative. Set in France, the movie keeps its focus on the title character, an unassuming and undemonstrative housewife whose husband (Andre Wilms), we gradually learn, is about to embark on a lengthy prison stay. The opening sequence, which finds Hannah dutifully packing a back for her spouse, is so devoid of dramatic signifiers that as the truth reveals itself the viewer may find himself questioning his eyes…though not his ears. There is virtually no dialogue for the first ten minutes or so.

The unnamed husband’s crimes are never explained, though in Hannah’s subsequent encounters with friends and family it’s easy to get an idea of the nature of his trasngressions. These encounters are situated in daily routines that include acting classes whose purport is purely expository. Indeed, Hannah seems as incapable of empathizing with fictional characters as she is with her husband’s alleged victims, though her son (Simon Bisschop) is explicit in his determination to have no more contact with his parents. Whatever sins the father committeed, the son sees the mother as complicit. To us she seems oblivious.

The difficulty of the movie is in Pallaoro’s decision to divorce these brief spurts of melodrama from the overall tone of the film, which is so evenhanded as to be almost hypnotic. At one point, while visiting her husband in prison, her stone face fads, but only for a second, when the husband hints that, of course, he isn’t guilty of the crimes he’s been accused of. If anything, Hannah’s steely demeanor may not just be a front to avoid thinking of her responsibility in the matter, but also a means of denying the obvious; and as the movie wears on her self-contained quietude takes on a desperate cast, a form of acting in and of itself, even if the only audience is herself. Her suffering is indirect; not a function of pain but rather one of avoiding pain. Pallaoro keeps the tension taut through intractable closeups and a sound design that reminds us that Hannah exists in the real world, even if she seems trapped in her own self-created hell. You wait for her to unravel. And wait some more…

This entry was posted in Movies and tagged Charlotte Rampling. Bookmark the permalink.