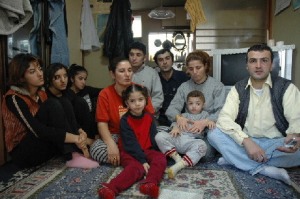 Here’s this week’s Media Mix about the scant coverage of Kurdish refugees in Japan. An obvious question that often arises when people discuss refugees in Japan is why they even come here in the first place, since Japan is clearly not accepting of refugees. The fact seems to be that the vast majority of people who apply for asylum really are trying to get permission to stay so that they can work, since most are from countries like Vietnam, Nepal, and the Philippines, where political and religious persecution exists but not to the extent it does in other countries. Kurds are definitely considered liabilities by the Turkish government. The main reason why Kurds come to Japan seems to be that those who feel they have to leave Turkey go to a place where they already know someone, relatives or friends they can stay with, and for whatever purpose there is already a small Kurdish community in Japan. I’m assuming that the bulk of Kurdish refugees go to other countries—Canada seems to be a common destination—and once in a while you do hear of Kurdish refugees in Japan going on to a third country as asylum seekers, but since the media doesn’t cover them in the first place, that information is hard to come by.

Japan has relatively good relations with Turkey, so accepting Kurds as political refugees would tacitly acknowledge that Turkey is a repressive country. The problem with this policy is that it puts the government in a difficult position with regard to asylum seekers. They summarily refuse to grant asylum but from that point on there is no realistic way of dealing with those individuals who refuse to go back, which is why they can’t get jobs and often end up in detention for little or no reason. The column mentions journalist Hideki Kashida, who often writes about detained refugees, and in his blog he once described how one Kurd was actually deported. The person was being held in the Ushiku Immigration Center in Ibaraki Prefecture. One day he was in the exercise room when a staff member summoned him for an interview. An officer told him that both his refugee application (not his first) and his provisional release request had been refused, and that he was going to be sent back to Turkey that day. The staff had already collected his belongings. He demanded to speak to his lawyer, but they ignored him, put him in handcuffs, and took him directly to Narita Airport. He didn’t even have a chance to say goodbye to other detainees. When Kashida asked a member of a detainee support group what happened to the man after he got to Narita, the person said they assumed he was accompanied on to a plane by immigration staff and sent back to Turkey. What happens after that, nobody ever knows. Given the cost and trouble (not to mention the potential violence; several deportees have died in the process) involved in such an action, it’s clear why the government has little appetite for forcefully deporting asylum seekers.

This entry was posted in Media and tagged Kurdish refugees. Bookmark the permalink.