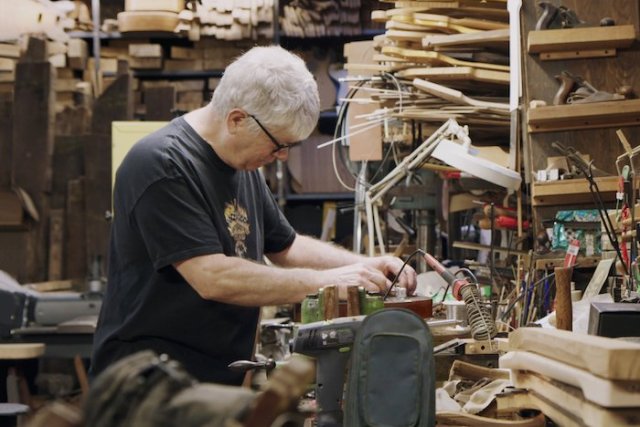 As fly-on-the-wall documentaries go, Ron Mann’s small-scaled portrait of a venerable Greenwich Village guitar shop should make even Frederick Wiseman green with envy. Due to its location and hard won reputation, Carmine Street Guitars can expect quite a few celebrity guitar aficionados to drop in on a regular basis, which means all Mann had to do for the five days he shot the film was just hang out. There’s not a lot of explication in the movie—no voiceover or text cards—but Mann knows what the audience wants to know and is able to extract this information with as little prompting as possible.

And what Mann is after is not so much the “placeness” of the store and the prestige of its clientele, but the pursuit of craft for its own ends. There are only two employees, owner Rick Kelly and his apprentice Cindy Hulej, who describe how they custom make guitars for special players. What makes Kelly unique as a guitar maker is his attention to materials. He regularly patrols Manhattan looking for dumpsters with discarded wood from demolished buildings (“the bones of New York”), some with very long histories. He turns this wood into guitars, thus making a Carmine Street guitar more than an instrument; it’s a piece of local history, just like Kelly’s enterprise, which he’s been working at since the 1970s. Oh, there is a third employee: Kelly’s octogenarian mother, who answers the phones. She as much a part of this institution as Kelly is.

And while Mann wisely allows the detail of the craft to come through—how to improve resonance through resins, how burning improves resilience—he seems more interested in the idea of the shop, a commercial endeavor that still runs on its own steam and represents a calling that is as responsible for great art as the great art itself. When Nils Cline comes in to buy a guitar for his Wilco boss, Jeff Tweedy, he and Kelly bond over something inexplicable to the viewer but no less poignant, a flaw that makes one guitar tantalizing in its unexplored potential. The famous musicians who chat with Kelly are envious: they may have the glamorous life, but they don’t know themselves through their work as thoroughly as this master builder does. Carmine Street Guitars, both the movie and the store, represent heaven on earth.