Posted on September 21, 2019 by philipbrasor 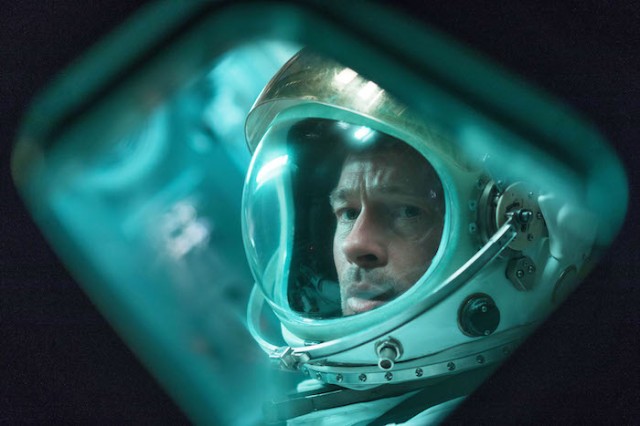 The points of narrative and thematic convergence between James Gray’s last film, the old-school world explorer epic, The Lost City of Z, and his latest film, the old-school sci-fi potboiler, Ad Astra, are too numerous to ignore, but the main point of divergence—the respective stories’ grounding in objective truth—clearly demarcate them in terms of relatability. Lost City was, in part, based on a true story that has developed a patina of legend over the years, and Gray obviously felt some responsibility in keeping the known facts about the legend central to his storytelling. Being set in the future, Ad Astra demands no such adherence to known truths, rather only the kind of verisimilitude we’ve come to expect from sophisticated science fiction movies, and while Gray does an admirable job in this regard, he can’t quite build a story that justifies it all.

As with all such projects, Ad Astra owes a great deal to 2001, both in its focus on how technology springs from capitalist impulses and its use of a journey into vast space to plumb the human condition. Brad Pitt plays an almost impossibly capable astronaut, Roy McBride, whose failed marriage seems to belie a compromising, even-keeled temperament. In a harrowing opening scene, McBride is externally repairing an elevator that reaches from the earth to the ISS above the atomosphere when a “power surge” hits the elevator and throws McBride into freefall. Though he manages to survive, it is his preternatural cool that saves him, and we soon come to learn that his pulse rate rarely climbs into discomfort mode, regardless of the situation. It what makes him, despite his age, the ideal choice of his superiors to travel to Neptune to find the source of the power surge, which has killed thousands of people on earth. The fact that Neptune was also the place where McBride’s own father, Clifford (Tommy Lee Jones), disappeared years earlier on a mission to seek out extraterrestrial life complicates the matter, which is why McBride has to undergo psychological testing every few days as he makes his way from earth to the moon to Mars, where he finally fails the test owing to the possibility that he may encounter his father after having believed him dead for years.

There’s a lot to consider here, and Gray, whose best works are deep character studies of flawed men (his breakthrough, The Immigrant, centered on a woman, though it was the men around her who seemed more receiving of Gray’s attention), reinforces the script’s philosophical bent with distracting voiceovers from McBride that throw into question his outwardly chilly demeanor. Like the protagonist in Lost City, who obsessed over a mythical place that others didn’t believe existed, McBride is being changed by what he learns not only about his father, but the rationalization of humans’ need to journey out into the universe. As it stands, the problems of earth are simply extended out into the solar system. The movie’s numerous action scenes are tied to the idea that for-profit purposes still dictate our actions as we venture beyond our planet: McBride’s transport on the surface of the moon is attacked by “pirates” whose own aims are never really explained, and while exploring an abandoned ship on his way to Neptune McBride encounters a strange group of primates.

By the time he reaches his destination, he no longer possesses the presence of mind to withstand the truth he encounters, but Gray’s penchant for keeping key motivations unclear defeats the ultimate purpose of this odyssey. He wants to say that the kind of human bond represented by the relationship between a father and a son transcends such worldly concerns as maintaining socioeconomic systems or even safeguarding humanity, but he never quite gets the point over because, in the end, the human mystery remains. Why some people do terrible things can’t be explained with such a trite acknowledgement of the dangers of ambition. They say the journey is the thing, which is why, on the whole, Ad Astra works. But you’ve eventually got to get to where you’re going.