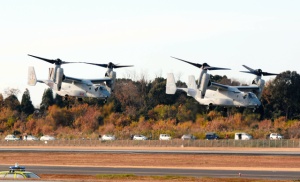 Here’s this week’s Media Mix about new flight paths in and out of Haneda International Airport, and the Japan-U.S. security alliance’s role in the matter. Given the amount of news that has gone on since I started writing this column two weeks ago, the issue may seem less momentous given that there may be fewer flight coming in and out of the airport during the next month or two, but the security alliance endures regardless of acts of God like epidemics. And it’s worth discussing in greater depth the reporting that Shigeru Handa conveyed during the Democracy Times conversation cited in the column. As noted, Handa, who has written books about the alliance, was mainly talking about the Osprey, a notoriously fickle piece of machinery when it comes to keeping it in the air, and one that would seem peculiarly unsuited for a country like Japan where military facilities are, by necessity, dangerously close to populated areas. Also, Japan’s climate is temperate, meaning hot summers and cold winters. Handa stresses at one point that the Ospreys deployed by the U.S. military elsewhere in the world are almost all in places where temperatures are high year round, like the middle east. There are a few Ospreys in Alaska, but they don’t seem to be used for much and, in any case, Alaska is very sparsely populated. Handa describes two joint military exercises, one called Northern Viper, which was carried out in Hokkaido, and another called Forest Light, which is carried out in various other places in Japan. When the weather was cold, the Ospreys had difficulties, apparently, compared to other aircraft—something to do with de-icing equipment that forced at least one Osprey to make an unscheduled landing at an airfield in Sendai while it was on its way to Chitose in Sapporo.

Consequently, the Osprey requires more than the usual amount of training flights so as to get pilots used to different climate situations. In the column, I talk in general terms about how the U.S. military jealously controls the airspace above Japan, reserving a good portion of it for its exclusive use, but also using the rest of it without much concern about how it will affect Japanese commerce or the lives of citizens. This includes the cost, a matter that has been in the news because President Donald Trump is demanding the Japanese government pay more to host American forces. Handa claims that the U.S. already charges Japan for a lot of things that are, objectively speaking, wasteful and redundant. The Forest Light exercises cost Japan ¥2.8 billion last year, which he says is outrageous given that the time period is so short. And the U.S. raises the price every year without really giving any reasons. In the past, it used to only cost ¥360 million. Next year, it’s estimated to be ¥3.1 billion. Japan has no say in the matter, or, at least, they don’t dispute the amount they’re asked to pay. With regard to the Osprey, Handa says the story is even more ridiculous. Though the Japanese Self-Defense Forces don’t like the Osprey and don’t have any use for it, they are being forced to purchase 24 over the next several years. Handa says the problem is not just the billions of yen needed to buy the aircraft. The maintenance is even more expensive. Though the Osprey will ostensibly be kept in Okinawa, the only place in Japan equipped to maintain the machines is the GSDF base in Kisarazu in Chiba Prefecture, where Subaru has a helicopter repair facility, which is important because Osprey are famous for breaking down. So most of the work is not strictly “maintenance” but rather full-on repairs, and the Osprey has become such a lemon for the U.S. military that parts are always in short supply, so the Subaru folks will likely have to wait a long time for parts to arrive from the U.S. Handa says that 8 Osprey brought over for use by the U.S. military have already had to be replaced because they were almost inoperable due to maintenance problems. And Japan pays for all of this, which is why the U.S. isn’t worried about it.

This entry was posted in Media and tagged Osprey. Bookmark the permalink.