Review: Capital in the Twenty-First Century 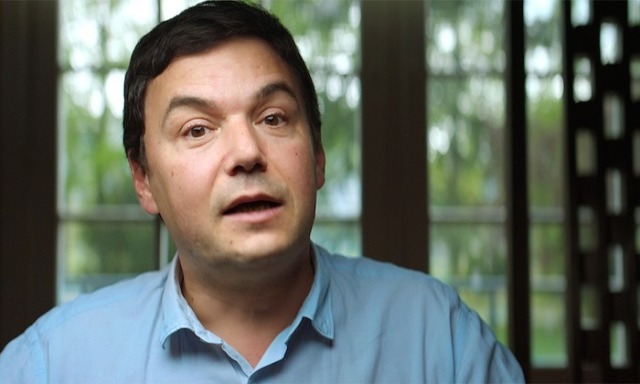 Though I was initially interested in reading Thomas Piketty’s big bestseller about income inequality as a permanently expanding fixture of economic life, I eventually concluded that the book would probably teach me little. Anyone with a decent grounding in social history who follows the news with any kind of regularity already understands most of Piketty’s most salient points: the growth of the middle class, as well as its doom, was predicted by Marx, stockholders eventually eclipsed stakeholders as the drivers of capitalism, late 20th century deregulation meant the end of upward mobility regardless of what the ruling classes told you, the financial industry would dominate all others, and China’s rise was just another victory for the oligarchy. The movie version of Piketty’s tome lays all of these elements out in a convenient timeline spiced up with eye-catching graphics and animation, peppered with tasty sound bites by some of the most charismatic economists presently pontificating, and presented at a crisp pace that will keep you riveted without breaking your brain.

What surprised me more than anything is how much things have not changed in the past three hundred years. The 1 percent, it turns out, has always been around, which I suppose isn’t news, but the thrust of Piketty’s narrative is that they’ve simply changed spots without altering their souls. Also, the cultural bon-bons make the documentary fun without watering down the message—comparing the economic undercurrents in the novels of Austen to those of Balzac, the creation of Christmas as an “industry,” the transformation of the image of Main Street into that of Wall Street. In fact, there is so much stuff to learn about capitalism in the 19th and 20th centuries that you wonder if there will be anything left over for the 21st, and though I knew where Piketty was going, it was still something of a shock to see how the end point of our great capitalist experiment was a world that not only didn’t need workers, but didn’t really want them either. The once hopeful idea of “workers as assets” was always a glorious lie, it turns out, even during that brief window of union-led progressivism after World War II, when the working classes thought they’d turned into the middle classes. Production determined the Allies’ victory during the war, and we all thought that would also determine a brighter future for everyone, but the 1 percent had different plans. For sure, except for some interesting trivial details, I learned nothing new from Capital in the Twenty-First Century, but I did find new ways to feel depressed about it all.

Capitalism in the Tweny-First Century home page in Japanese.

This entry was posted in Movies and tagged Thomas Piketty. Bookmark the permalink.