Here is my list of ten-best-movies-plus that comes out in EL Magazine this week. It was a disappointing year. The pickings were slim because, on the one hand, movies are getting worse and, on the other, Japanese distributors are handling fewer foreign films. This latter trend reflects not only economic realities, but the concurrent trend of a local preference for domestic fare, which by itself should be good news. However, the most popular Japanese movies being released these days are financed by larger media companies with a bead on specific demographics. They tend toward a numbing sameness in style and sensibility, and are dependent on a predetermined group of tested actors and idols, none of whom betray having any real stake in the work they’re doing.

If it sounds like Hollywood, well, that’s a worldwide trend. But even non-mainstream Japanese movies, or, at least, the ones I’ve seen, are stuck in a rut that values expression over intellect. Not counting those in the field of anime, Japanese features are all about evincing responses, either with contrived plots, extreme bits of acting, or direction that clearly shows off a filmmakers’ influences. Behind it all there’s usually not much of substance. A pretty good example is Cold Fish, which opens next month and has been getting a lot of buzz for being edgy and all that. However, it’s a fairly atrocious film, filled with gratuitous sex and violence that not only feels false but isn’t even fun.

As a representative of vanguard Japanese cinema, Cold Fish is depressing for another reason: it doesn’t contain a lot of over-extended stars. One of my excuses for not being able to fully appreciate Japanese movies is that they usually contain actors who are all over the place, and because I watch Japanese TV for a living I usually find it difficult to separate the figure on the screen from his or her media-saturated image. The cognitive dissonance gets in the way of enjoying the other elements. I had no such distraction with Cold Fish, and it still seemed an exercise in runaway style.

But the main reason I feel little compunction in finding fault with current Japanese movies is that old Japanese movies are so much better. I realized this anew in November when I went to see Tokyo Monogatari. I was never as enamored of Ozu as some people are, and preferred the livelier social entertainments of Naruse and Mizoguchi when it came to that era of production. But seeing it for the first time on the big screen (I’ve seen it once on TV and once in a university film class), with all my faculties engaged, I became swept up in the melodrama. Unlike today’s films, there was nothing ostentatious about the acting or the production; no outward attempt to show the audience that the people involved with the film were working hard. Today’s Japanese films aim to impress (See! I can act! Watch me cry real tears!). Ozu just wanted to tell a simple but significant story in the most effective way possible. It’s harder than it looks.

All of the following films were released theatrically for the first time in Tokyo during 2010.

1. Let the Right One In (Sweden): While the Twilight series procrastinates over how to resolve the mortal-vampire love conundrum, this chilly movie gets to the heart of the matter and makes it even more squirm-inducing by situating the relationship between two pre-adolescents stuck in a rundown suburban apartment complex in the middle of a Scandinavian winter. Disturbing, touching, and at times quite funny.

2. Coraline (USA): In Henry Selick’s stop-action fantasy world, children actually possess the kind of imaginations they’re famous for. The title character has to choose between a quotidian existence with distracted parents and a dream life with “ideal” parents, and her decision launches an action-packed quest that may unsettle younger children, but that’s OK. Kids occasionally need to be unsettled.

3. Lebanon (Israel): Samuel Moaz’s exercise in pure cinema places viewers in an Israeli tank during the initial hours of the 1982 invasion of Lebanon and refuses to let them out. Their company is a group of young soldiers who don’t always know what they’re doing, and whatever your take on the war itself it’s impossible not to empathize with their panic and confusion. Lebanon is as involving as movies get.

4. I Love You, Phillip Morris (USA): Jim Carrey’s exuberant neediness as an actor finally finds the perfect outlet. As Steven Russell, a con man and compulsive liar with a permanently bruised ego, Carrey utilizes his own extreme talents as a comedian to convey Russell’s superhuman resourcefulness in keeping the love of his life, played by Ewan McGregor, by his side, whatever the cost. 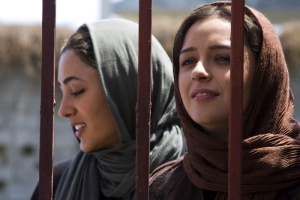 5. About Elly (Iran): In trying to engineer a matchup between two acquaintances during a weekend sojourn, a woman inadvertently crosses several social lines that affect more than just the two prinicipals. Asghar Farhadi’s domestic drama reveals a great deal about interpersonal values in Iran, but it also says something profound about the pitfalls of friendship between men and women, whatever the culture.

6. The White Ribbon (Germany/Austria): Michael Haneke dispenses with the usual confrontational methods while retaining his accusing tone in this didactic study of a German town on the eve of World War I where mischief is afoot and anybody could be the culprit, given the paternalistic rot that’s infected every household. You know where it will all lead, but the historical distance isn’t meant to let anyone off the hook.

7. Toy Story 3 (USA): What does a boy do with the things of childhood as he embarks on adulthood? That’s the question the third installment of Pixar’s inanimate-object animated epic asks and then answers in a surprisingly thoughtful way, but not before Woody and Buzz and the other inhabitants of Andy’s toy chest go through the most hair-raising, and funniest, adventure of their existence.

8. Bright Star (UK/Australia): Jane Campion lets John Keats’ Romantic poetry speak for itself at length in this biopic about the doomed writer’s relationship with Fanny Brawne, thus freeing Campion from the need to cinematically recreate the workings of the literary mind. She focuses on the love story, which is as purple and passionate as Keats’ verses, except that there’s no sex, not even cuddling. That doesn’t mean it isn’t sexy.

9. The Hurt Locker (USA): Though not quite the shock to the system its boosters claim, Kathryn Bigelow’s Oscar-winner is still the best non-documentary film about the Iraq War so far, a movie that focuses on what made this conflict unique in terms of the way it’s prosecuted and its long-lasting effect on the Americans who fight it. How it affects the Iraqis is a whole other movie.

10. A Christmas Tale (France): What a mess. Arnaud Desplechin knows that large family get-togethers are potential multi-crisis events, and in this portrait of a middle class French clan gathering for Noel he explores every possible thing that can go wrong, and then a few more, because he’s a troublemaker. If some of the stories whiz by too quickly, well, that’s usually how it feels at these affairs.

Enter the Void (France): Gaspar Noe’s latest outrage takes place in Tokyo and references, quite literally, the Tibetan Book of the Dead. Despite its many implausibilities–or maybe because of them–it’s a strikingly original visual trip.

Winter Soldier (USA): This rarely shown 1972 film documents the 1971 “winter soldier” hearings in Detroit, where Vietnam vets explained to reporters the atrocities they witnessed and took part in. Still wrenching after all these years; maybe more so, considering how little we’ve learned.

Film socialisme (Switzerland/France): Supposedly Jean Luc Godard’s last film, and certainly not one of his worst.