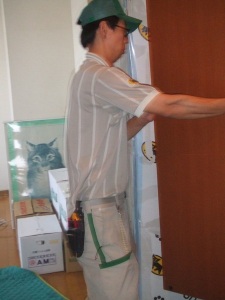 Yamato does some heavy lifting

Here’s this week’s Media Mix, which is about how express delivery companies now represent the spirit of Japanese service as well as the virility of Japanese men. Though the column dwells mainly on the role that Yamato and Sagawa have played in promoting these images, in many ways they were self-perpetuating. Though Sagawa no longer uses the cartoon symbol of a hikyaku—the traditional couriers who was famous for running the length of the old post roads—it’s that sort of hustle that today’s drivers are supposed to embody. However, what was more interesting to me is how such a job came to mean more than just a paycheck to the workers themselves, and instinct tells me that no one sticks with delivery work because of the image boost. I know, because I was a delivery person in San Francisco for a number of years after university. I actually enjoyed the work because it got me out on the streets, but pay was based on how many packages you handled, which means you had to not only hustle but cultivate the dispatcher and cheat a bit on routes. One aspect of the job that isn’t really covered in reporting about delivery services is commissions, which tend to be downplayed in Japan. There isn’t even a good word for it in Japanese. Dekidaka-barai is the closest I’ve heard, though it’s usually used to describe piece work. In the West, commissions are usually associated with sales work, which implies that the salesperson is working more for himself than for his company. I don’t know if that’s the reason salespeople in Japan don’t work for commissions, but it might explain why “sales” (eigyo) is usually a more group-oriented endeavor in Japanese companies. For delivery people, however, commissions are a more direct indication of their effort and efficiency, and apparently wages in the industry are pegged to how many customers a driver can cultivate on his route. My partner used to work in the shipping department of a famous fashion designer, and the Sagawa guy stopped in every hour or so checking if there were any packages and constantly berating her to “send out more,” as if it were her decision. When we recently moved, we used Yamato, who gave us a deal that was better than ones offered by dedicated moving companies, and they did a great job. Labor standards don’t seem to apply to drivers, who often work more than ten hours a day and six days a week with no overtime. Really good drivers can make in excess of ¥5 million a year, which doesn’t sound like much considering how many hours they work but in today’s job environment that probably sounds good to a lot of people stuck in contract or part-time jobs. And if you can get sex on the side, it’s gravy.

This entry was posted in Media and tagged Delivery companies, Sagawa, Yamato. Bookmark the permalink.