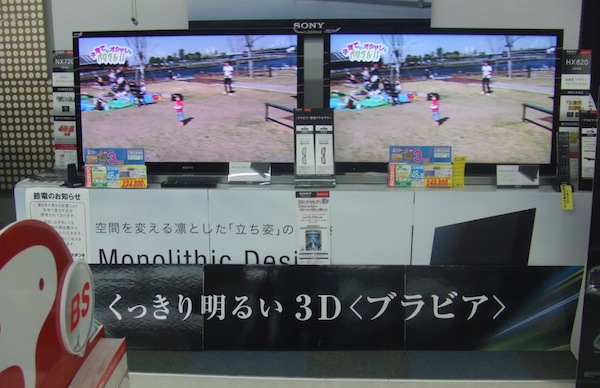 Does crap look better in 3D?

Here’s this week’s Media Mix, about the end of analog TV broadcasts, which takes place today at noon. In the column I touch on satellite broadcasting as an example of a standard system that might have made more sense than terrestrial digital broadcasting, but, of course, BS broadcasts are available in Japan and NHK makes money from them. In fact, many of the same people who seemed reluctant about making the changeover to digital terrestrial have the same reservations about having BS forced on them. That’s because if you buy a digital tuner or new TV, you automatically get a feature to receive BS broadcasts. Recently, a Tokyo Shimbun reader wrote to the paper saying he had just bought a new TV and wondered if it meant he now had to pay NHK the extra fee for BS. He had never watched NHK’s BS broadcasts before and had no intention of watching them in the future, but apparently NHK expects you to pay if you have a BS tuner or TV that receives BS signals.

The guy has a point and one that the media hasn’t talked about at all in the runup to the digital changeover. We recently moved into a new apartment complex that does not have a digital antenna. If we want to receive normal digital broadcasts we either have to put up our own antenna or subscribe to the apartment complex’s cable TV service, which comes with BS channels. As soon as we subscribed a guy from NHK was at our door asking for the BS fee in addition to the regular NHK fee for terrestrial broadcasts. We’ve always paid for both and had to go through a complex song-and-dance about direct bank transfers that hadn’t been registered yet by NHK because of the move. But what impressed me was that NHK obviously receives subscriber info from the cable TV company. The bill collector didn’t ask us whether or not we watched BS, he simply said we had to pay for it. And that’s apparently also true of people who buy new TVs. Because of the B-CAS card, which comes with every new TV sold since 2002, NHK knows who has a TV or a recorder with a BS tuner, since the card automatically sends this data digitally to a foundation (obviously another amakudari concern) that monitors digital TV usage. In the old days, the NHK bill collector simply looked to see if a house or apartment had an antenna and then knocked on the door, demanding that the resident pay his NHK fee. The B-CAS system makes this shakedown process more sophisticated, but the end result is the same: NHK can demand you pay even if you say you don’t watch NHK.

The sensible thing to do would be to implement a scramble system similar to the one used by pay satellite content providers like WOWOW and Star Channel. Thanks to the B-CAS card, broadcasters can “turn on” certain channels for specific TV sets whose registered owners have paid their subscriptions. Everybody else just gets a blank screen. NHK could do the same thing for people who say they don’t intend to watch their BS channels. Instead they allow anyone to watch and then demand they pay for it. At ¥950 more a month, it’s a considerable expense for many households, especially considering what you get. A good portion of the content on the two BS channels is eventually broadcast on NHK’s terrestrial channels. All you have to do is wait a month or two.