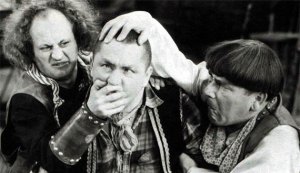 The little boys understand: The 3 Stooges

Here’s this week’s Media Mix, which is about the Otsu bullying case. The main point of the piece is that above and beyond the whole issue of bullying in school is the issue of violence. What immediately struck me when I heard accounts of the Otsu case from court records is why the students who allegedly were doing the “bullying” weren’t suspended or otherwise punished for subjecting the victim to beatings, even if those beatings had no malicious intent behind them. When I was in school, if a teacher saw such a thing–or for that matter even heard about it–the students involved would be punished regardless of the intent of the violence. Of course, teachers understand how adolescent impulses often manifest themselves, but as long as the adolescents were in school they were the responsibility of the school administration, and such behavior was strictly forbidden. That’s because violence under any circumstances (except, I guess, on the football field) is itself forbidden. For some reason this rule of thumb was not enforced in the Otsu junior high school and, presumably, at many other schools in Japan.

I realize, of course, that bullying comes in many forms, some of which are chiefly psychological in nature and do not involve direct physical contact. The thrust of the column is to separate violence from bullying so that at least one aspect of the problem becomes easier to manage: Rather than struggle with a definition of bullying, punish all demonstrations of violence, because violence is wrong. As far as what comedian Takeshi Kitano claims about people being able to tell the difference between real violence and make-believe violence, that seems to go without saying. One aspect of Takeshi’s essay that I didn’t talk about in the column was his belief that the measure of a comedian’s skill (gei) is how well he can convey the sort of discomfort that comes from being the butt of a joke without distressing the viewer by making him believe the abuse is genuine. Though I understand what he’s getting at I also find it a bizarre rationale for ijime (bullying) humor. Of course, such humor isn’t limited to Japan. When I was growing up, the Three Stooges were very popular and parents at the time were alarmed that young children were so taken by their form of slapstick, which was completely structured around acts of cartoon violence. The same reasoning was given by people who defended the Stooges’ humor: kids knew it wasn’t real violence. However, I never cared for the Stooges myself. Their brand of humor got old really fast, and I feel the same way about most Japanese humor I see on TV now.

Japanese friends have told me that prior to the 1960s, when TV became ubiquitous, “comedy” was only for adults, and it was the sketch show Konto 55-go, with its cartoony violence, that first attracted children. It was the same as the Three Stooges controversy. PTAs all over Japan complained about the show, saying that kids would copy the actions of comedian Kenichi Hagimoto, who was always beating his partner Jiro Sakagami. Takeshi mentions the show in his essay and says that once Hagimoto got rid of the childish violence ratings fell. I’m not sure what that’s supposed to mean. That only kids watched the show? That people are more likely to laugh at humor with a mean edge to it than other kinds of humor? The problem with TV now is that it is built around comedians, and all the humor is based on humiliation. In the last few months, as the Otsu case took on greater meaning, some of these comedians were asked about the bullying problem, not because they may exacerbate bullying by their example, but because they may have advice for victims of bullying. Comedian Neko Hiroshi told some reporter that he was bullied as a child and that he used that experience in his career as a comic. Neko Hiroshi’s whole “gei” is to be ridiculed for being dumb and pointless, and somehow he’s being held up as an example of how one can overcome victimhood to achieve success–by playing a full-time victim in a professional capacity. And he isn’t the only one. Everyone agrees that humor based on humiliation is mainly attractive to immature sensibilities. But eventually you should outgrow the Three Stooges.