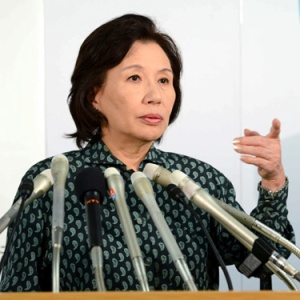 Here’s this week’s Media Mix about Education Minister Makiko Tanaka’s decision to approve three applications for university status after originally rejecting them. In the column I didn’t talk much about Tanaka’s political reasons for either the initial rejection or for changing her mind, only that she received a lot of pressure to do the latter. The latest issue of Shincho reports that she may have been thinking of the upcoming election, which at the time wasn’t set yet but was certainly something she had to think about. Regardless of whether her initial decision to deny these three school certification as 4-year universities was suggested by her subordinates at the education ministry, as Aera hypothesized, there was probably still an element of spontaneity in her action, since that’s part of her working style. But as Shincho itself hypothesizes her reelection is not a done deal. The LDP is backing Tadayoshi Nagashima, the popular former mayor of Yamakoshi-mura, for the constituent seat that Tanaka currently occupies and Shincho thinks he has a good chance of winning. Though supported by the ruling DPJ, Tanaka is nominally an independent, and Nagashima, who won his own Diet seat last time as a proportional candidate, may have more immediate support in the contested Niigata representational district since the locals seem to be drifting back to the LDP, which Makiko’s father, Kakuei Tanaka, once headed as a kingpin. Tanaka might have thought that sparking controversy as an anti-bureaucracy maverick would stimulate her base again and help her win.

Nevertheless, her ostensible reasoning for rejecting the schools doesn’t seem to have been a particularly deep one. She must have known that the three institutions would put up a fight, since their applications were already rubber stamped by the advisory panel, which is made up of current and former members of the “education industry” I mentioned in the column. It’s also possible she knew, at least in the back of her mind, that she would eventually reverse her decision. In that regard, the initial media interpretation of her actions, that she was just showboating again, wasn’t far from the mark, and people who have since criticized her for the eventual about-face may be missing the point. Some have interpreted her rejection of the three schools as a rejection of education policies in general. There is little evidence that that was the case. She simply wanted to point out that the process of approving new universities was not effective since the panel approved everything. On the NHK radio discussion I mentioned, someone said that Tanaka probably knew her decision wouldn’t make a difference in the short run, but that it would at least draw attention to the problem. That problem, however, is mostly financial. The bigger problem of Japan’s education policy — about whether or not young people are benefiting from school as it’s now structured — was not her concern. And while she did change her mind, she doesn’t seem repentant. Tanaka said something about how the three schools should be able to derive some “good PR” from the controversy and recruit more students than they would have without the publicity, and who knows? Maybe they’re happier than they would have been had they just been automatically approved.