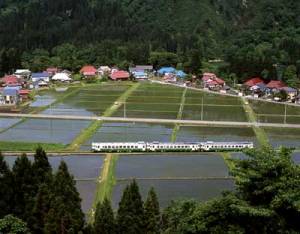 Here’s this week’s Media Mix, which along with another article we posted on our JT blog completes a double this week on public transportation. Though the two pieces address different news stories, both bring up the issue of what sort of obligation private companies have toward the public. The reference to Cerberus Capital, the company that is trying to buy a controlling stake in Seibu, is central to this issue because Cerberus is American and represents a very powerful financial trend of the past forty years. Though the company seems to want to play down the specifics of its reconstruction aims for Seibu, it’s obvious that Seibu itself, not to mention other entities that might be affected by the company’s restructuring ideas, fear the outcome. Several media reported that Cerberus wants to shut down five of Seibu’s smaller railway lines because they are losing money, and this is easy for Japanese people to believe. Just look at the state of public transportation in the U.S. Outside of a few major cities, it has never been less popular, and Amtrak is considered a joke, mainly because it still has to be propped up by the federal government. I remember reading an article in one of the online magazines late last year that described conservative American politicians’ deep-seated hatred for public transportation.

Trains in Japan were originally a mix of public and private lines, but when the government privatized JNR in the late 80s, the public dimension vanished, at least on paper. JNR left billions in debt that the central government (meaning you and me) is still paying off while the various JR entities are now turning a profit. The question of what sort of responsibility private railway companies have toward their patrons becomes more complicated when you realize those companies would have never existed in the first place without public subsidies, especially in those cases, like the Tadami Line, where local residents have no other means of transportation unless they can drive. The background of the railway is instructive. The tracks that eventually became the Tadami Line were built to transport construction supplies to the sites of several hydroelectric dams. When the last of these, the Takogura Dam, was completed, JNR bought the tracks and turned it into the Tadami Line. According to Tokyo Shimbun, the line has always been in the red ever since it became a people moving enterprise, but it was a public entity designed to serve the local people. After JR East took it over, it started looking for an excuse to close it down, and the floods that knocked out bridges in 2011 provided that excuse. JR East just doesn’t want to spend money to repair those bridges. This is the prerogative of a private company, whose mission is supposedly to bring profits to its shareholders. The central government still believes that any public transportation entity, even a privately owned one, must be regulated since its services are vital to the well-being of patrons who depend on it for their livelihoods. In America, that idea now seems old-fashioned, maybe even radical to certain diehard capitalists. In Japan it’s still debated, and it should be. Japanese private railways have done an excellent job of serving the public, particularly in and around the major cities, but one has to wonder how well they would have performed without that public element.