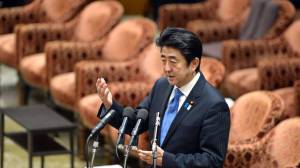 Here’s this week’s Media Mix, which is about the current administration’s attitude toward the constitution as demonstrated by its handling of the vote disparity issue. This attitude might have met with more criticism from the media if the judiciary were stricter about its own enforcement of constitutional precepts. Maybe I’m making too much of something that doesn’t merit close scrutiny, since a constitution is simply a blueprint for governing and lawmaking. The American constitution included the Bill of Rights, though it should be pointed out that it was an amendment. Those who want to rewrite Japan’s constitution often make the case that the Americans wrote it, which is only partly true, but in any case they use it as an excuse to say they want to make the document more Japanese. Regardless of Article 9’s renunciation of war, these people feel that the present constitution stresses citizens’ rights at the cost of responsibilities, and they want to correct that imbalance, as they see it. The whole point of defining civil rights is to check the power of the state, since the people are sovereign in a democracy, and it is this aspect that the current administration doesn’t seem comfortable with. Last week during a Lower House budget committee hearing, the Democratic Party of Japan’s secretary-general, Goshi Hosono, questioned Prime Minister Shinzo Abe’s interpretation of the constitution, in particular the “three principles”: people’s sovereignty, pacifism, and civil rights. Abe said he understood them well and did not plan to change them. But he added that he believed the document should have a fourth principle since in the current charter the citizens “impose limits” on the state’s authority. “We have to include in the constitution the idea of what kind of country we want to make,” he said. Hosono, obviously alarmed by this statement, countered that the purpose of the constitution should be to limit the state’s authority. The real question, then, is do the Japanese people think that the constitution is a satisfactory charter? At the moment the media is convinced that the citizenry supports the Abe administration and so it would be easy for him to change the constitution, but the country simply thinks that Abenomics is worth a try. There’s really no consensus about the constitution. In a recent Kyodo News survey a majority of respondents said that the government should keep the law that stipulates approval of at least two-thirds of the legislature is necessary to change the constitution, which would seem to indicate they aren’t anxious to change it. My feeling, however, is not so much that the people like the constitution, but rather that they don’t think it’s broken enough to warrant fixing.

edit: In the original post there was a typo that said 75 percent of the legislature had to approve a change to the constitution.