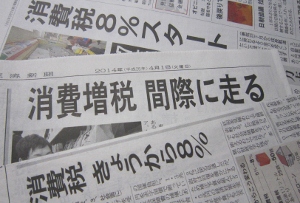 The photo and caption my editor chose for this week’s Media Mix touched on an aspect of the consumption tax hike I didn’t mention in the column itself, mainly because there wasn’t enough room and seemed sort of incidental, but, then again, there are so many incidentals to the tax hike story that they constitute a full-blown issue unto themselves. Though the government is trying to be thorough about making businesses add the tax increase directly on to prices so as to make it clear that everyone is supposed to pay it equally, businesses will find ways of using the structure of the law to their advantage. So while McDonald’s is obliged to fork over the increase in full to the tax bureau, they spread it out in such a way that some customers may think they’re getting a bargain. Apparently, vending machine companies are doing the same thing, according to a report I saw last week on TV Asahi’s “Hodo Station.” These companies have to pay 3 percent more in consumption tax for every item they sell in a given machine, which theoretically means they add the proper amount to each price, but vending machines don’t make change in any denominations less than ¥10, so the companies are spreading the tax around the items in a machine in such a way that the tax is figured for sales from the entire machine, meaning some prices will be increased while other may be decreased, but in any case all items won’t equally bear the tax hike.

Though these considerations can hardly be called loopholes, the system does have enough of them to make trouble for tax collectors. After filing this week’s column I saw two reports, one on NHK’s website and another in the Asahi about a small exporter who was caught by the tax bureau for cheating on his consumption tax reporting. This Tokyo company, called Crescendo International, sells fishing rods and reels overseas, which means it doesn’t have to collect consumption taxes from buyers and pass it on to the government. However, it does have to pay consumption taxes to its domestic suppliers, which means the government refunds those taxes later. This, of course, is one of the stickier parts of the system and one the media rarely talks about. In the context of the bullying of small suppliers that I talked about in the column, it results in a huge windfall for a lot of exporters. For instance, Toyota doesn’t have to charge consumption taxes on all the cars it sells overseas, but it does have to pay consumption taxes to its many suppliers. In negotiations, though, the bigger company often pressures the supplier to absorb the consumption tax if it wants to keep the bigger company’s business. But the government doesn’t know that, and the bigger company, though it isn’t actually paying the consumption tax, can still legally report that it did and then get a refund, which amounts to being free money. From all appearances, Crescendo actually made a living from this scam because it never recorded a profit since it was established less than ten years ago. However, it received ¥22 million in consumption tax refunds from the government in 2011 and 2012. The company bought supplies amounting to ¥55 million, but reported that it paid ¥400 million for the equipment, including applicable consumption taxes. Since all of these items were then presumably sold in the US and Australia, Crescendo wasn’t compelled to pass on the consumption tax they paid, so it qualified for a refund. It’s an easy fraud, since the required documentation is simmple–an application form you download from the Internet and easily forged invoices. Crescendo supplied both to its allegedly innocent accountant, who then made the proper submissions. The refund comes back four weeks later. According to Asahi, the company was receiving between ¥500,000 aned ¥1.5 million a month in refunds, and when the company was caught the owner admitted it was all a big scam and that he never thought about making a profit since it was easier to play the tax system. About 138,000 companies apply for refunds every year, and in the last five the tax office says it’s collected ¥10 billion in wrongful refunds and attached penalties from companies that abused the system. Considering how easy it is to pull off, that’s probably only the tip of the iceberg.

This entry was posted in Media and tagged Consumption tax, tax bureau. Bookmark the permalink.