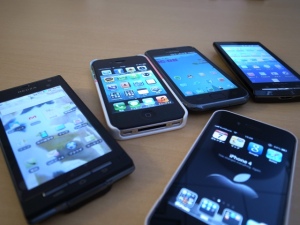 It’s probably obvious that most of the posts for our Yen For Living blog, which since April has morphed into a twice monthly column in the Japan Times, originated with our own experiences as consumers. This week’s piece, about mobile phone plans, is really an attempt to understand the ridiculously Byzantine process of setting up such a plan, and I’m not entirely sure the article is that successful. For sure, it doesn’t come close to conveying the frustration many people must feel when trying to get straight answers from salespeople and other representatives of the various carriers who want your business. For one thing, there isn’t enough space to discuss the problems involved, so it might be helpful if I relate how our own search went.

At the end of the article I mentioned how we asked Y!Mobile about switching our Docomo keitai plan to one of their smart phone plans without mentioning that they have more than a few options. When we went directly to Docomo with the same idea there was only one smartphone plan given to us, and since it involved data services we weren’t going to use we didn’t see the point in paying for it. Later, after we had filed the article and checked out a few more companies we went back to Y!Mobile to look at their cheaper plans because we already subscribe to their pocket WiFi plan and thought maybe we could get a special deal if we added a smart phone. As it turned out, they were in the middle of a campaign to boost their smartphone sales. They have three plans with different monthly data limits, and each plan would be about ¥500 less a month if we signed a two-year contract before a certain date, though the fee would go up ¥1,000 after the contract expired and we didn’t expressly inform them we didn’t want it renewed. This re-up strategy is used by all the carriers and is notorious.

Since Masako wants an iPhone and Y!Mobile doesn’t carry them, I decided to go with their offer alone. We both work at home where we have an Internet connection and a dedicated phone line. We only need cell phones and mobile Internet when we go out, which isn’t that often. I prefer using my iPad mini when I’m out for data communications, so the pocket WiFi is enough for me. Similarly, a regular cell phone is sufficient, since I only need it to make calls and send short messages. In fact, I originally thought I would just get a new cell phone. The screen on my old one had gone blank several weeks ago, and when I went to Docomo to get it fixed was told that they didn’t repair that model any more, but if I wanted to talk to somebody about that I would have to wait an hour. In other words, I had to waste a lot of time talking about options I wasn’t sure I would be interested in. So I left without talking to anyone and started looking into options with other companies who were obviously desperate for my business. (As it turns out, there are a lot of small operators who are happy to fix cell phones for reasonable fees, but I didn’t find that out until too late)

Y!Mobile also has cell phone plans, but as the salesperson explained they weren’t that much cheaper than a smartphone plan if all I was really going to do was use it for calls and short messages. She recommended I get the cheapest smartphone plan, which limits my data usage to 1 GB a month and cost ¥2,480 with the campaign discount. If I rejected some of the “options” that come with that plan, I could save even more, and, of course, they would give me a free unlocked phone as long as I stayed for two years, which means I could go to another carrier if I wanted to after that time and use the same phone. The plan ended up being about ¥1,700, so I took it.

Naturally, it’s never as easy as all that. First of all, I kept my old Docomo number–Y!Mobile insisted on it, as a matter of fact–and had to cancel the contract right there at the Y!Mobile counter. Since Masako and I have a family plan with Docomo and it’s in her name, she had to talk to the Docomo rep, and the rep was pretty tenacious, offering her all sorts of incentives to make sure I wouldn’t leave. Fortunately, Masako was armed with all sorts of rebuttals, starting with the poor treatment I had received at the Docomo shop to the paucity of reasonable plans for someone like me who didn’t need a lot of add-ons. It took something like 15 minutes. Then I had to sign two contracts, one for a new pocket WiFi, which was about ¥200 cheaper than my old plan and supposedly comes with a more powerful router, and a new plan for a smartphone. I chose a Nexus5, made by LG, on the recommendation of the salesperson.

I ended up staying there for another 90 minutes. Though all the conditions I signed up for were perfectly legitimate, they required a certain amount of confirmation with the main Y!Mobile office. That’s because I was making the application in a discount electronics store. The dedicated Y!Mobile shop closest to our home doesn’t keep pocket WiFi routers in stock, we found out earlier, so they wouldn’t have been able to process my upgrade. This seemed pretty strange and when we called Y!Mobile customer service, the person there gave us conflicting information about why this was. How can a store promote an upgrade when they don’t have the upgraded merchandise in stock? We never got a clear answer, but, essentially, that problem was moot in the discount electronics store, which has everything in stock. What the Y!Mobile counter doesn’t have, however, is the capability for expediting the contract directly. I waited a full 45 minutes before the rep could access the Y!Mobile server to process the contract, and once she did there were all these small problems that required her to call the office directly in order to solve them. As it turned out, my original pocket WiFi contract, concluded two years ago, had my name written wrong in katakana. But she couldn’t correct that herself. I would have to go to the actual Y!Mobile shop to have my name changed.

So later that day I went to the outlet that didn’t have the WiFi router in stock in order to change my name on a contract for a new router I was buying at a different store. The salesperson there had never done this before and it took another 45 minutes just to change my name. But that was the easy part. The next day, we had to cancel the options that we didn’t need for both the pocket WiFi and smartphone plans. One option was for “insurance” and the other for something called an “Enjoy Pack” which to me just seemed like a way for Yahoo to bombard you with advertising. Again, we couldn’t cancel these plans in person when I signed the contracts. I had to call, which, as anyone who has dealt with customer service knows, is an extremely frustrating experience. First of all, the call costs ¥10 a minute, and requires automated input of about a dozen phone numbers, passwords, and serial numbers. The WiFi didn’t take long, but the number for the cell phone contract didn’t seem to work, so we called a real human and waited 20 minutes for one.

So, yes, I finally got a smartphone plan that seems to match my budget and needs, but I spent about three hours I could have used more constructively carrying it out–and that doesn’t count the time we spent doing research in the first place. The main problem, however, is not the venality of the companies, which is certainly unforgivable, but rather the fact that the vocabulary the reps use is never clearly defined and always changing, as if it’s been specially designed to keep you off balance. I still feel dizzy.

This entry was posted in Money and tagged Docomo, smart phones, Y!Mobile. Bookmark the permalink.