Posted on December 6, 2015 by philipbrasor 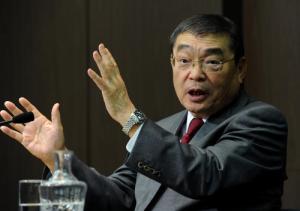 Here’s this week’s Media Mix about the Broadcasting Ethics and Program Improvement Organization’s complaint against the government for censuring NHK over some staged content on one of its news shows. In the column I imply that NHK tends to toe the government line anyway, but my editor clarified in the first sentence that NHK is a “national broadcaster,” which slipped by me during the proof-reading phase. NHK is more properly described as a “public” broadcaster, though it’s perfectly understandable if people think it belongs to the government. In fact, a lot of people believe just that.

In fact, this interpretation was reinforced last Thursday at the regular NHK press conference, when the company’s president, Natsuto Momii, addressed reporters’ questions about the censures–both the Liberal Democratic Party’s of NHK, and the BPO’s of the LDP. Momii downplayed the matter, saying it was no big deal. He said that NHK went to the relevant government committee a while ago to deliver a report on the incident and the committee expressed its concern over the staged interview. Momii said NHK accepted the opinion of the LDP, “but that doesn’t mean we received pressure from them.”

As far as the Broadcast Law goes, while Momii didn’t mention it by name, he reiterated that “we always strive for impartiality,” and that when any organization requires an “explanation” of their broadcast practices, NHK is happy to go and talk to them, and not just the LDP. “That doesn’t mean we do what they tell us to do,” he stressed, making sure the reporters understood that while NHK listened to complaints, it followed its own conscience. On the other hand, he declined to comment on the BPO’s opinion.

The BPO’s complaint toward the LDP, however, was meant to expand on concern for all broadcasters, not just NHK, even if NHK was the object of the LDP’s scolding. In a sense, Momii’s waving off the controversy just goes to show that NHK and the LDP have a nice relationship. In other words, they have an understanding, and you can take that to mean whatever you want.

This entry was posted in Media and tagged Katsuto Momii, NHK. Bookmark the permalink.