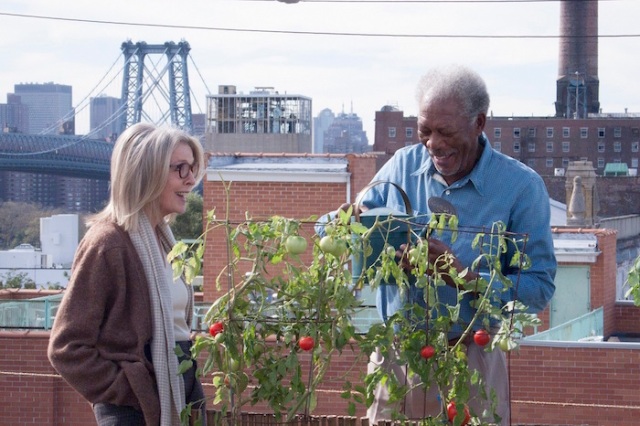 It must be contractually mandated that every movie in which Morgan Freeman appears he has to provide folksy voiceover narration. He does it in this bittersweet domestic drama, though there isn’t a whole lot of need for it. The situation is easy to grasp and hardly requires elaboration. Freeman and Diane Keaton play Alex and Ruth, an elderly couple who have spent their whole married life in a 2-bedroom Brooklyn apartment. Since it’s a walkup and they live on the fifth floor, they decide, at the urging of their realtor niece, Lily (Cynthia Nixon), to sell and move somewhere closer to the ground or, at least, to a building that has an elevator because they won’t be able to handle stairs forever.

Freeman’s voiceovers are not only superfluous, they’re misleading in that they give the impression early on that this is a movie about him, but if it has any value as a story it’s in its portrayal of a marriage that has lasted this long because of two people who have grown into each other, and in that sense Freeman and Keaton are not only equals, but believable as an item without forfeiting their respective charms as veteran actor-personalities. Director Richard Loncraine, working with a script by Charlie Peters based on a novel by Jill Ciment, honors the two stars by not getting in their way, but he doesn’t always give them enough to work with. Though I haven’t read the book, I imagine its appeal springs from the way it addresses the current New York real estate market. Alex and Ruth bought their apartment in the 70s, when the neighborhood was rough and property was cheap. They stand to get a cool million for it now, which spurs them to consider moving into Manhattan. As Lily facilitates the sale, and potential buyers of all temperaments and sensibilities invade their abode during the open house, matters become tense between husband and wife, exacerbated by the fact that their dog is in the animal hospital undergoing expensive surgery. When they decide on a whim to look at apartments in the city and quickly find one to their liking, the movie generates some suspense.

Too bad Peters drops the ball on the incidentals. There’s a puzzling scene in which the couple has lunch with the old friend whose gallery has always sold Alex’s stodgy portraits. The man’s son, who is taking over the business, tells Alex he can no longer represent him because there’s no “market” for his kind of paintings “any more.” Alex has an old man fit, as if he were a pensioner railing at his nurse, but the scene feels false about the art scene. It’s as if Peters, desperate to reveal something ornery in Alex’s personality, dreamed up the scene based on what he thinks the art market is like. Similarly, Lily’s gung-ho salesmanship is such a caricature of New York forcefulness you wonder if she didn’t simply waltz in from an episode of The Honeymooners. There’s enough real drama in the basic situation and the subtle interaction between the two principals that you don’t need to make up a plot that, like the voiceover, makes obvious what this couple is going through and what they’re afraid of. You certainly don’t need the subplot about a Muslim terrorist on the loose, a sideshow that seems to have something to do with Alex’s sympathy for marginalized people but mainly serves to point out how much current events affect real estate prices. Too much information indeed.

5 Flights Up home page in Japanese.