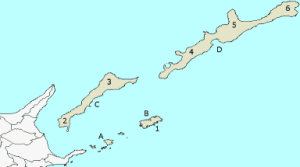 Here’s this week’s Media Mix about the recent summit between Prime Minister Shinzo Abe and Russian President Vladimir Putin. As mentioned in the column, the Japanese media mostly approached the meeting as a show without explaining the reality behind the idea that Russia was somehow going to capitulate on its “occupation” of the four “northern territories” that Japan claims as its own. The only TV station that really came close was NTV, but it was only after the summit and at Abe’s own insistence. He was actually relatively straight about the fact that Russia was not going to budge on the issue and that Japan would have to reassess its approach to the islands. And while NHK did cover details that indicated this, it didn’t actually provide any analysis that would enlighten viewers to the truth of the matter. During the discussion on DemocraTV referred to at the end of the piece, several commentators derisively mentioned NHK reporter/announcer Akiko Iwata, who apparently is always given the Abe beat at the broadcaster since she’s always on hand when NHK interviews the prime minister. The commentators made fun or her obsequious behavior and one even said she “should quit along with Momii,” in reference to the outgoing chairman of NHK who has mostly been an embarrassment during his tenure. However, no one mentioned the string of foreign documentaries that NHK broadcast just before the summit. These programs, from places like Germany and WGBH in Boston, were mainly about Putin’s alleged criminal activities. The decision to run these caustic docs would seem to indicate an attitudinal divide at Japan’s public broadcaster: on the one hand, coverage of the summit was bland enough so that Abe could try to get his way with the Russian leader, while on the other NHK was joining in the Putin-bashing that’s become de rigeuer in the rest of the developed world. Who’s in charge here? Obviously, not Momii any more.

This entry was posted in Media and tagged Northern Territories, Vladimir Putin. Bookmark the permalink.