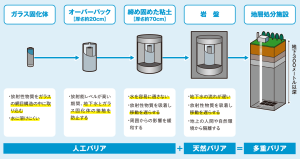 Steps in disposing of nuclear waste

Here’s this week’s Media Mix, which is about the map recently published by METI of “suitable” areas for repositories of nuclear waste. The article’s main theme, in accordance with several media outlets’ coverage of the map, is that METI and the nuclear power industry are dawdling and that it will still be many years before any action to address the issue of Japan’s nuclear waste is begun. As pointed out in the column, the map indicates sites where high-level waste as a product of reprocessing spent fuel could be buried, but Japan has yet to launch its reprocessing program and, in fact, may never do so due to safety concerns. Meanwhile, 18,000 tons of spent fuel sits in storage at nuclear reactors nationwide. That amount will only increase if the government starts reopening idled reactors.

What wasn’t pointed out in the article is that this problem won’t go away even if the government decides tomorrow to abandon its nuclear energy problem. It has to find a repository for all the spent fuel if it isn’t reprocessed, since it remains in a dangerous state as long as it’s just sitting around. Some of the material that lead to the meltdown at Fukushima Number 1 is believed to have been spent fuel.

Japan would do well to look to Europe, which is currently addressing this problem. In an NHK special first broadcast in 2012 about the problem of nuclear waste, a camera crew went to Switzerland to see what that country is doing about its spent fuel (there is no reprocessing system in Switzerland, so no second-hand nuclear waste). The program shows how the country is slowly and methodically building repositories under mountains to receive the fuel and hold it for thousands of years. One dairy farmer, who is against nukes in principle, is participating in the project by donating land and time, because he says that regardless of his opposition to nuclear energy he knows that something must be done with the fuel and, thus, is working to make it happen. “It is our responsibility as Swiss,” he said.

The Japanese people have roundly indicated that they don’t really want nuclear power any more, but haven’t done anything to advance that position except when it comes to their own backyards–don’t restart reactors near our homes and don’t build repositories under our land. But there’s nowhere else to bury waste that’s already here. In a way, the current bureaucrats in METI and the current leaders of the nuclear power industry count on this NIMBY-derived apathy, which only exacerbates the problem. People will have to accept this waste and make the best of it. There’s no other way.

This entry was posted in Media and tagged nuclear waste. Bookmark the permalink.