Posted on February 2, 2018 by philipbrasor

A recent discussion I read online about XTC made me look on the web for an interview I did with Andy Partridge and Colin Moulding in Tokyo in early 1999 after they had just released the first volume of their Apple Venus series. I couldn’t find it so I’m reposting it here for everyone’s edification. It originally appeared in The Japan Times. 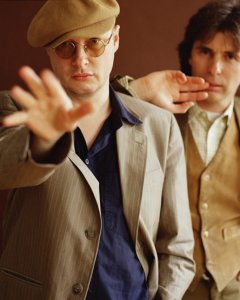 Since they don’t tour or make videos, XTC give interviews. Lots of them. Colin Moulding, the group’s soft-spoken bassist reckons he and his partner, guitarist Andy Partridge, have done something like a million since they began promoting their new album, Apple Venus, Vol. 1, last fall.

When I mention that most groups tour to support a new album, Partridge laughs. “That’s an interesting word, ‘support’,” he says. “If it has to be supported, then we’d rather the record company support it.” The comment is interesting, since the band no longer records for a major label, having painfully extricated itself from the clutches of Virgin Records. They recorded Apple Venus themselves and then signed distribution deals with regional labels. We’re sitting in an enormous conference room of one of them, Pony Canyon, which is putting a lot of money and effort behind the record in Japan, where XTC is a cult band of enormous influence.

“Anyway,” Partridge continues, “the album certainly doesn’t need us on stage ramming it down people’s throats.” Apple Venus doesn’t contain any music that could be rammed down anything. A year in the making and arriving seven years after their last studio album, Nonsuch, it furthers XTC’s reputation as British pop’s most willful eccentrics, with airy songs about country life that steer clear of anything that might be mistaken for a current trend. If the album has a more subdued mood about, it has as much to do with financial circumstances as it does with artistic decisions. Partridge and Moulding wanted to release a double album but couldn’t afford it, so they are releasing the more acoustic volume one first and the second more electric collection later this year.

“We wanted to make an album of a certain restricted pallette,” Partridge says of the first volume, which came out at the end of February. “Greens and browns, mainly.” The bespectacled singer proves his penchant for at least half this earth-tone selection by dressing totally—loose pants, work shirt, buckskin baseball cap—in the same shade of clay. “The word ‘pastoral’ fits, I think.”

I mention that one British review called it “agrarian.” He laughs. “I like that, too. As long as they didn’t mean agrichemical.” Perhaps the reviewer was thinking of XTC’s hometown of Swindon. The English rock press never passes up the opportunity to let its readers know that the band is from, as Moulding puts it, “the outback.”

“They make too much of it, really,” says Partridge. “It’s a terribly uncool place to come from. In one week, I remember, I saw five TV comedy shows that used Swindon as a joke. It’s an ugly town surrounded by beautiful country. Being from there has probably hampered our career.”

Then why stay there? I ask.

“You resist the temptation to move because your roots are there,” says Moulding.

This kind of conservatism is central to XTC’s fabled adherence to integrity. As one of the few English bands to emerge in the heady year of 1977 that’s still around (though in reduced form), XTC remain crankily dedicated to making better records as they get older. They never look back and pay little attention to what’s going on around them. Partridge, in fact, claims that he doesn’t listen to pop music at all.

“Most of the music I’ve listened to in the past few years is early music. The last LP I bought was a 1920s dance band. I don’t listen to pop music intentionally. I don’t find myself hunting it out. You don’t have to. It’s going to find you, anyway.”

Moulding is into Broadway musicals. “South Pacific. West Side Story. I never got it the first time out, probably because it was music my parents listened to. I like the way it’s constructed.”

Moulding supplied the new album with two ditties, both of which sound like something that, yes, your parents might dig. More significantly, they focus on topics that are unfashionably specific and unironic: gardening (“A man must have a shed to keep him sane”) and drinking for simple pleasure.

“Music in a lighter vein is no less valid than the heavy stuff,” he mentions in our conversation, at least twice. Partridge concurs: “A lot of bands do one emotion — dark angry songs. It’s bad art if it’s emotionally narrow. In the early days a lot of critics thought we were some kind of comedy group because we could be light-hearted. We could be serious, too. We could be trivial.”

Partridge’s much larger contribution to Apple Venus, while still retaining the intricate structures that make his songs fascinating to some and impenetrable to others, do, in fact, contain more overtly negative feelings than his songs did in the past.

The opening cut, “River of Orchids,” a complex layering of backward-moving string pizzicatos, brass bleats, and Partridge’s rushed, strangled singing, takes the songwriter’s love of things green to a more militant level. “Want to walk into London on my hands one day,” he strains, “I want to see a river of orchids where we had a motorway.”

“I don’t like cars,” he says disgustedly. “Cars have been responsible for murdering the English countryside.”

He gets even more ornery on the startlingly frank “Your Dictionary,” in which he disses his ex-wife in no uncertain terms. “It was written at a low point in my life. I allowed myself the luxury of one bitter song, and then as soon as I finished I tried to distance myself from it. I don’t want to wallow in it, like Phil Collins.” But you recorded it, I say. Partridge smiles slightly. “I was gently bullied into it.”

This “low point” in Partridge’s life was brought on not just by the divorce but by illness and the band’s battle to get out of its seemingly eternal contract with Virgin Records, who, despite a clear lack of interest in promoting anything the group wanted to do (they killed Nonsuch by ignoring it), still controlled the lion’s share of royalties. The seven-year recording hiatus was not due to any artistic regrouping. “We were on strike,” Partridge says, which was depressing for someone who defines himself as a “record maker,” having given up live performance in the early 80s. “For me, being on stage is an hour-and-a-half of pure fear.”

Moulding wanted to sign with another major label, “but the terms were always the same as Virgin’s.” So they decided to go with Cooking Vinyl in the U.K. and TVT in the U.S., both of which leave all creative considerations up to the artists.

“Indies are much more humane,” Partridge says, and adds that the two have formed their own label called Idea. “The fun of being an artist is doing what you want.”

Considering how uncompromising Partridge and Moulding are about doing what they want, it will be interesting to see what kinds of bands they attract. Moulding thinks so, too. “It would be nice to sign someone for their artistic integrity.”

That, Partridge corrects him, is in the future, “because we don’t have any money, only…” he waits a beat for the proper effect “…ideas.”