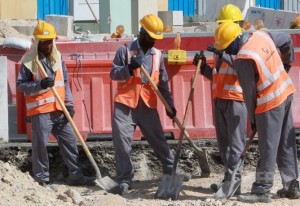 Here’s this week’s Media Mix, which is about the media’s sudden interest in the detention of undocumented foreigners. As pointed out in the column, most of the people being detained are overstayers, but apparently there is a good many who are asylum seekers. Given the extremely low likelihood of obtaining a refugee visa from the Japanese government, it’s surprising that asylum seekers even consider Japan, though, of course, if they are genuinely desperate because of conditions in their home country that may not be an appropriate reaction. In any case, the government has said that most asylum seekers come to Japan for economic reasons, and if you’re a healthy skeptic you’ll take that position with a strong dose of salt because the Japanese government has baldly stated that it’s their aim to prevent foreign laborers from taking up permanent residence in Japan, even though everyone knows Japan needs workers. Part of my own skepticism springs from the belief that, at one time, asylum seekers were allowed to stay in Japan on a provisional basis and even work while their applications were processed, but that was changed in 2012 when the provisional work-release program was suspended.

However, according to a report I saw on the NHK news show “Closeup Gendai” last week, which was broadcast after I had filed this week’s Media Mix column, the work-release program seems to be back on. The show was about a temp company that acts as a middle man between asylum seekers and small companies who needed workers. NHK made no mention of the suspension of the work-release program in 2012, implying that the law was never changed. More significantly, the foreigners who apply for refugee status openly claim economic reasons on their applications, which means, of course, that they are guaranteed to be turned down. (It also means the government’s claim that most asylum seekers’ reasons for coming to Japan are economic is true.) This would appear to be nothing more than a gaping loophole in the immigration system, and it seems there are thousands of foreigners working in Japan on refugee work-release permits. The foreigners who apply for the permits know this well and seem fine with it.

As pointed out by one of the participants in the forum I mentioned in Sekai magazine’s June issue, despite its hard-ass reputation, Japan really has no immigration policy. Everything is ad hoc, depending on the circumstances at the moment. The government wants the public to think it’s not letting in foreigners for low-paying jobs, but anyone with eyes can see that’s not true. Even the refugee application process is being gamed—and by the government itself.

This entry was posted in Media and tagged foreign workers. Bookmark the permalink.