Review: The Day After 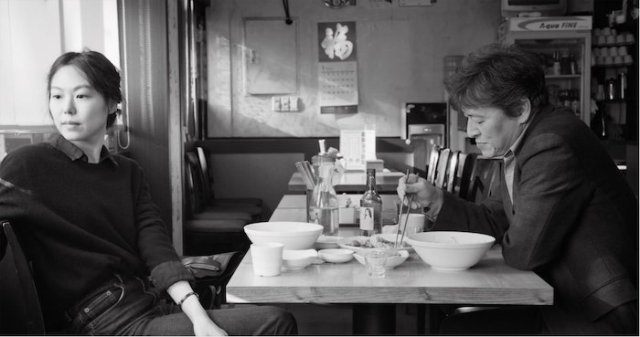 Hong Sang-soo’s antiromantic comedies differ little in terms of narrative themes, and tend to distinguish themselves through formal construction. The Day After is almost unique among his films in that its form is conventional—no “what if” digressions or POV mischief—and for once the comedy is clear-eyed and unfussy. Bong-wan (Kwon Hae-hyo) is a typical Hong stand-in protagonist, a noted critic-cum-small press publisher who is having an extramarital affair with his only employee, Chang-sook (Kim Sae-byuk). In the brilliantly staged opening scene, Bong-wan is having breakfast with his wife, Hae-joo (Jo Yoon-hee), who has somehow gotten wise to the affair and plies him with questions as he plays with his food and laughs at her. The scene is both hilariously on point and witheringly precise about the marriage dynamic, but the viewer has no way of knowing whether Hae-joo’s suspicions are correct. Still, if the viewer has seen a Hong film before they can probably assume them to be.

Hong subverts this expectation by showing it’s both true and false. Bong-wan has already broken up with Chang-sook, and in an intensely uncomfortable flashback shows how, during one of those drunken meals Hong is so fond of (this one during the day), Chang-sook goes swiftly from trusting acolyte to resentful victim, accusing Bong-wan of cowardice. She quits him and her job in a nasty huff. When the narrative returns to what has been set up as “the present,” Bong-wan is interviewing a replacement named Areum (Kim Min-hee, who, for what it’s worth, Hong had left his wife for). It’s obvious from the outset that Bong-wan means Areum to not only replace Chang-sook as assistant, but also lover, and the brilliance of the sequence of scenes that develops this seduction is how it reveals Bong-wan’s eternally narcissistic temperament without showing him to be underhanded. Areum, a student of good literature, is enamored of the older man and while she doesn’t seem interested in sleeping with him doesn’t lay down the law–at least not at first.

The ringer, the incident that tips her hand, is when Hae-joo, still steaming from that morning’s breakfast tiff, shows up at the office while her husband is out running an errand and mistakes Areum for the mistress who has already quit and supposedly moved on. There’s a deliciously old-fashioned comic vibe to the scene that recalls the best of Preston Sturges, as Areum, totally unprepared for the fusillade of abuse this woman directs at her, tries desperately to get a handle on what is actually going on.

Hong doesn’t stop there. Chang-sook eventually returns and there are several more dual dialogue sequences that sample every possible configuration of characters. Being the only man in the picture, Bong-wan is asked to represent his gender, and, as is Hong’s wont, he fails miserably as a sexual being and a professional. But if the women come off better in contrast, it’s not because they stand up to Bong-wan’s interminable self-regard. If anything, all three still seem mysteriously invested in his approval. Some will call this element sexist in nature, but Hong’s jokes have always been at his own expense. Any woman who is fool enough to fall in love with him deserves what she gets.

The Day After home page in Japanese.

This entry was posted in Movies and tagged Hong Sang-soo. Bookmark the permalink.