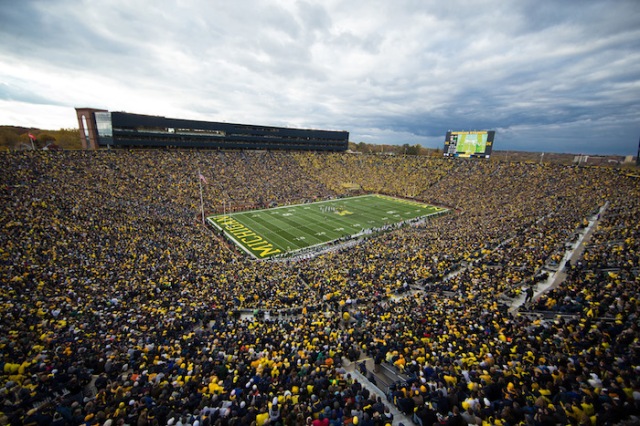 As a documentary filmmaker, Kazuhiro Soda goes with what he knows, or, more precisely, who he knows. In most cases his subjects are people he’s close to, and while the relationship makes the filmmaking process easier and more open it also allows Soda to sort of cruise. His latest film is more ambitious in terms of scale, but it still takes the easy way. Apparently, Soda had a teaching gig at the University of Michigan in Ann Arbor, and he recruited some of his students to help him make a documentary about the university’s famous football stadium, which is supposedly the second biggest sports facility in the world. Filming mainly during a home game against UM’s nemesis Michigan State, the group of more than 15 cameramen try to take in everything, from concessions to rich alumni to scalpers and even the locker room.

It’s a rich, enlightening movie that provides a good idea of the kind of chaos that such sports events generate in the U.S., and thus reinforces the stereotype many people have about American excess. Nevertheless, this is basically a PR film about the University of Michigan that was produced and funded by the University of Michigan, so despite the extensiveness of the coverage, the film never really gets below the surface. We see the VIP booths filled with rich OBs who aren’t shy about telling us how much it cost, but we never really get much information about who these alumni are and what such associations mean. Nobody bothers to explain the rivalry between UM and certain teams that makes their games some of the most anticipated in America. (Soda himself has said he knew nothing about the sport being played before he started the project.) There are a lot of statistics thrown at the viewer, but none are given proper context to make any sort of impression except ones of volume and size. The Big House is the perfect title, because everything in the movie is celebrated for its bulk.

Including the movie itself. Though it was never boring, it did seem about 20-30 minutes too long, owing probably to Soda’s desire to use everything his students gave him, or at least to be fair. And, to his credit, he is fair. Everyone who filmed got an equal director’s credit.

photo (c) 2018 Regents of the University of Michigan

This entry was posted in Movies and tagged Kazuhiro Soda, University of Michigan. Bookmark the permalink.