Posted on September 17, 2018 by philipbrasor 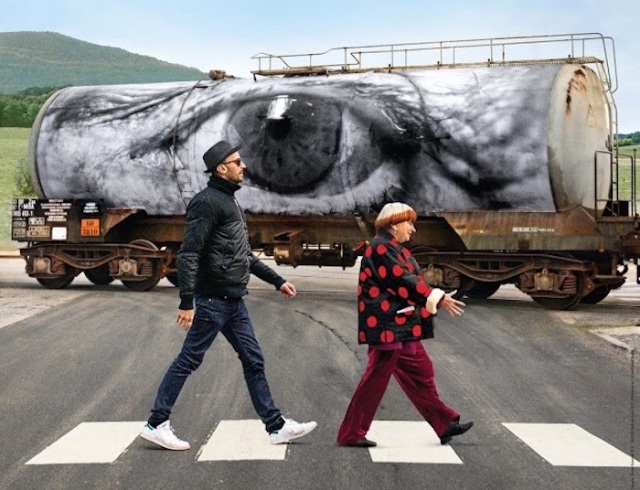 Collaboration is more than just the theme of Agnes Varda’s latest curiosity. Teaming up with the tall-glass-of-water visual artist JR both on camera and behind it, the veteran nouvelle vague director expands her late career discussion of the French polity by engaging it in one of JR’s art projects, thus freeing herself up as more than just an enthusiastic observer of what is mostly rural life.

During the course of the film, the two artists travel the French countryside in pursuit of meaningful encounters with average people. The entry point into these people’s lives is JR’s very large prints of the individuals they encounter, which are then plastered on surfaces in very public places. Sometimes the photos are of faces, sometimes they are of full body shots. Many include more than one person. They are then affixed to buildings and even vehicles. The point is that each work of art is attended by a true story related by the subject, the overall result being a portrait of a people that becomes more indelible with the addition of semi-permanent visual aids.

But that isn’t the real appeal of the movie, which is Varda’s and JR’s interaction with each other. The pair putter around in a large truck listening to pop songs and talking about anything that comes into their heads. There’s a playfulness to these interactions that defies the age difference and informs their conversations with the farmers, factory workers, and village bureaucrats they meet on the road. Their collaboration is mainly with life, and they extend it to everyone they encounter. The goofiness is built into the contrast between the two principals: Varda is short, plump, pixieish, with a drastic two-tone bowl cut, while JR is tall, lanky, insouciant, his head constantly encased in a fedora and dark shades (a running joke throughout the film). Varda is also 88, and she is happy to bring her experiences into the discussion, dropping names like crumbs of bread and plumbing her exceptional memory for anecdotes that apply to any situation she finds herself in.

And there is drama. JR drops his flippant air when they visit his 100-year-old grandmother, and a visit to an ophthamologist reminds us of Varda’s encroaching decrepitude, since it appears she is going blind. But even that sequence is leavened with a joke—he eye-slashing scene from Un Chien Andalou, a movie she apparently had something to do with. For once the purposely shocking image is revealed for what it is: a prank against conformity, which is a stirring rebuke to the idea that the average person is a slave to normalcy. The people we meet are widely varied in their appetites and needs, and as our hosts continually expound, the mission of film and photography is to open us up to that possibility. JR’s project is a willful exaggeration of this premise. His works are intended to crush the notion of the commonplace: How can a dockworker’s face stretched across the side of a building be considered “normal?” How, for that matter, can a goat’s?

In the end, Varda and JR attempt to visit the man who perhaps best represents all they have tried to accomplish in their unique movie: Jean-Luc Godard. They fail to make the connection, though the aborted visit does lead to another wonderful anecdote about a weekend Varda and her late husband, Jacques Demy, spent with Godard and his wife, Anna Karina. Every moment in life is magic. Few movies drive that point home as well as Faces Places does.

This entry was posted in Movies and tagged Agnes Varda. Bookmark the permalink.