Posted on September 22, 2018 by philipbrasor 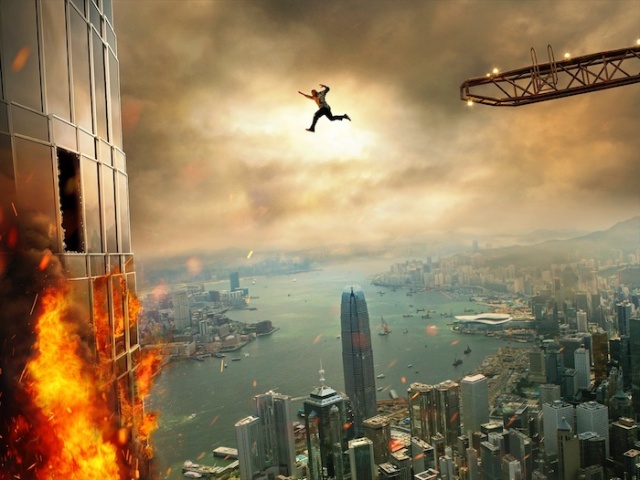 It’s no scoop to say that the IMAX format dictates the production of certain movies, since it’s difficult to imagine a Hollywood conference call where, after a movie has been greenlighted and cast, someone thinks out loud, “Hey, maybe this would work on a towering screen!” The latest Dwayne Johnson vehicle, in which the former wrestling hulk shares top billing with a 4,000-foot CG Hong Kong office-and-residential building, was obviously made with the IMAX format in mind, and after you think carefully about it, Johnson is the only A-list actor at the moment who could have starred without wilting in the shadow of the titular edifice.

Of course, that greatly reduces the appeal of the movie when it isn’t giving the viewer vertiginous shots that highlight how high up we are. Though the obvious template here is The Towering Inferno, basically director Rawson Marshall Thurber is just trying to one-up that WTC novelty, The Walk, wherein Robert Zemeckis attempted to get audiences to puke without resorting to horror movie images. Thurber assumes that by putting his star, who plays a former FBI agent now being interviewed as the yet-to-open skyscraper’s security chief, in constant danger and forcing him to leap across empty space a mile or so above the ground, he’ll get the reverse peristalsis reflexes churning as well, but since he isn’t much on building suspense—the action in Skyscraper is relentless—there isn’t a whole lot of fear generated, either.

Even the script’s one attempt at high concept—Johnson’s Will Sawyer is an amputee thanks to a botched hostage situation that’s actually the most exciting thing in the film—is never taken advantage of fully. Also, the disaster that forces Sawyer into superman mode is completely man-made and on purpose. Some sort of terrorist organization has planted devices that start fires on multiple high floors, which shouldn’t be of much consequence because nobody has moved in yet—except, of course, Sawyer’s wife (Neve Campbell) and kids. Would he have tried to save the building if they weren’t there? Probably, but now we’re getting into suppositions that make absolutely no sense outside the bailiwick of Hollywood.

And that brings us to the film’s most egregious missed opportunity. Johnson has proven that he’s adept at self-deprecating comedy, even in the purview of action films, but Thurber seems uninterested in anything but depicting The Rock’s body mass and how extraordinary the character is in moving that bulk nimbly throughout a burning high-rise. Johnson really was just cast for his body. Consequently, the set pieces are thrilling but instantly forgettable, the stakes high but dismissed as soon as the next hazard is conquered. In the end, the skyscraper wins, even if it isn’t fit to occupy any more.

This entry was posted in Movies and tagged Dwayne Johnson. Bookmark the permalink.