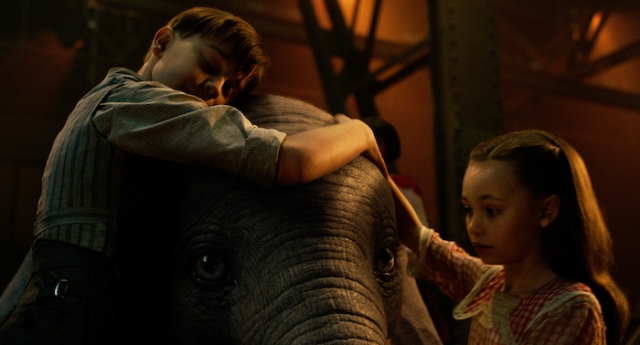 At this writing, the new CGI live-action Dumbo is being slated as a likely box office smash, thus justifying Disney’s faith in director Tim Burton as the kind of edgy filmmaker they can trust with their family fare. Inherent in this proposition is the idea that, of course, there is no intention of supplanting the original animated version of the story, but rather to simply give it more relevance for an audience whose tastes in technology are presumably more sophisticated than they were in 1941, but that’s a load of bull. Disney owns the story and the images and thus controls how those elements are reconfigured for a new generation. The real idea is to exploit a property, and nobody expects Burton, regardless of his reputation for the weird and the wondrous, to make anything other than what Disney approves of. And if you hold Alice in Wonderland up as an example of what Burton can do in the face of corporate control, remember that it was probably the worst reviewed film of his career. Neither Burton nor Disney seems willing to test each other in the same way this time.

On the Burton tip, the changes amount to bringing in a bit of safe morbidity in terms of history. The main character, aside from the baby elephant, is a World War I veteran named Holt Farrier (Colin Farrell), who, missing an arm, returns from battle in 1918 to both his immediate family—a young son and daughter—and an extended one—a middlingly successful traveling circus run by an ineffectual Barnum wannabe, Max Medici (Danny DeVito). While Farrier was in Europe, his wife died, so he relies on the other circus staff to help him take care of his kids, who have become more attuned to circus life in his absence. Since Farrier can no longer partake of his previous vocation—training and riding trick horses—he’s put in charge of the other animals’ care, including the elephants, one of whom quickly gives birth to a clumsy male calf with ridiculously big ears that turn him into the laughingstock of the Big Top. But, of course, the kids adore him and take it upon themselves to make sure he fits in.

Though these plot points differ in some aspects from the original story, they adhere to the general spirit, which is that Dumbo has to overcome some sort of adversity in order to “belong,” which is where the flying comes in. Through an accident, the two kids, one of whom, Milly (Nico Parker), is a budding scientist, discover that Dumbo, when provided with a certain stimulus, will flap his ears and lift off the ground. To his credit, Burton stages the little pachyderm’s public debut as a real attraction in a fairly thrilling and delightful way, and for a moment, at least, his Dumbo looks as if it may be as affecting as the original, but then capitalism has to muck everything up.

Because once Dumbo is a hit, a big entertainment mogul named V.A. Vandevere (Michael Keaton) swoops in and buys the struggling enterprise in order to install it in his amusement park called Dreamland, with Dumbo as the star attraction. The park, located on Coney Island in New York, is an impressive concoction, a debased, pompous slab of gaudy chutzpah that could be mistaken for Burton thumbing his nose at Disneyland, but if there’s anything the suits at Disney can handle it’s irony. They did a really good number on it in the famous “princesses” scene in Ralph Breaks the Internet, but Burton doesn’t really know what to do with this concept except to go through the usual motions toward a climax that’s every bit as desperate as the ending of a Marvel superhero extravaganza: loud, violent, pointless. Though he retains the maternal rupture that made the original so emotionally indelible, here it’s subsumed in a lot of distracting spectacle. Capitalism wins again.

This entry was posted in Movies and tagged Tim Burton. Bookmark the permalink.