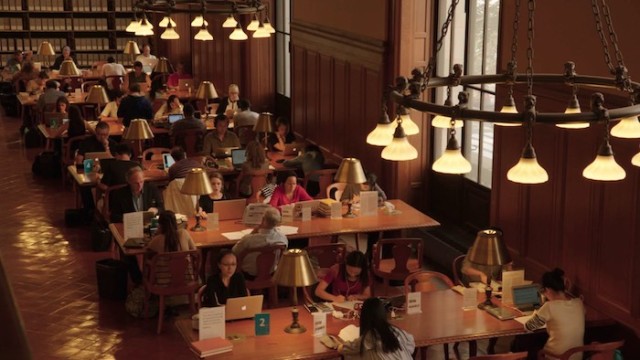 At one point at the beginning of Frederick Wiseman’s monumental documentary about the New York Public Library, someone basically calls it a holy place for secular people. That’s a fair description of any library, but New York’s is special in that it not only provides the largest research resource collection of almost any institution in the world, it actively involves its users in the life of the city’s vast culture. Entering the huge, beautiful main branch at 5th Avenue and 42nd Street, with its famous marble lions and elegant wood paneling, is like entering the city’s soul—the good ecumenical soul that should be at the heart of every great city’s endeavor.

But Wiseman does something more. He reveals the institution to be not only a holding center for information, but a social space that brings people together for the common task of self-enrichment. He’s careful to point out how vital the various smaller neighborhood branches are to the lives of local residents, for whom very few things are free the way the library is. On a larger scale he shows free public interviews with such cultural stars as Elvis Costello, Patti Smith, and Ta-Nahesi Coates. He also presents fairly long lectures on things like the Marxist view of real estate and the role of slavery in Western Civilization. He shows people doing research into cancer diagnoses and the provenance of the Border Patrol. Andy Warhol, it’s revealed, got a lot of his ideas from the NYPL. It’s tempting to wonder what Wiseman, in fact, left out, because he’s famous, especially in his longer, later works, for giving more than ample time to certain anecdotes and discussions that he appreciates simply because he likes them. And the fact is, his taste is impeccable.

He also delves into the library’s funding and politics, and the viewer, of course, wants it all to be approved. There’s one uncomfortable scene of a fund-raiser for the Schomburg Center for Research in Black Culture where we realize that most of the money is coming from rich white folks. Perhaps that can’t be helped, but Wiseman’s good sense compels us to understand that the library is seen by both sides of the political divide as worthy of support and attention. If you’ve ever lived in New York and left it, Ex Libris will crystallize exactly what you miss most about the city. It’s a unique and wonderful thing, and Wiseman’s film a fine testament to it.

This entry was posted in Movies and tagged Frederick Wiseman. Bookmark the permalink.