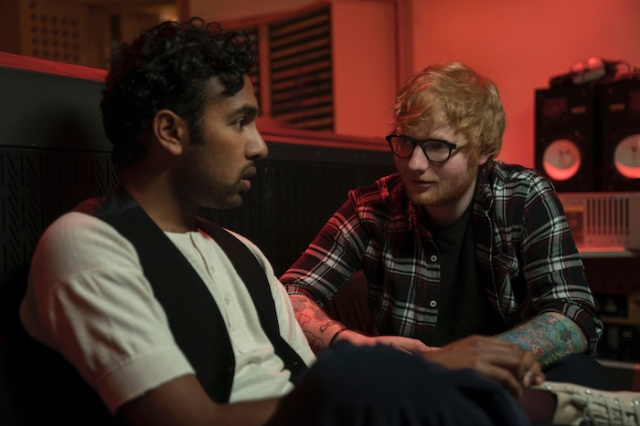 The most interesting thing about this pop star fantasy is that the Beatles estate agreed to license so many songs. McCartney I can understand, since he was always the band’s most fervent champion regardless of how his beloved “tunes” were used, but Yoko? In her dotage she seems to be slipping a little. Danny Boyle’s film, based on a script by the always annoying Richard Curtis, imagines a world without the Beatles, which, in fact, is pretty difficult to do considering how large the Fab Four figure in the history of the late 20th century—or in the 21st, for that matter. It’s a clever conceit as far as it goes, but Curtis and Boyle try to take it further with mixed results.

The movie’s playful mood is set right from the start, with struggling singer-songwriter Jack Malik (Himesh Patel) plugging his one decent pop song to mostly uninterested crowds in lazy dive bars and rural English festivals. His friends encourage him and his biggest fan is his manager, Ellie (Lily James), who, of course, doesn’t make any money off of him, but the script is rather clear that she and Jack are not an item at the moment, just good friends. Bicycling home from a gig one night he gets into an accident just as the entire world suffers an electrical blackout. He wakes up in the hospital and after he’s released his friends buy him a new acoustic guitar to replace the one wrecked in the accident. To try it out he plays “Yesterday.” Everybody is very impressed and asks Jack if he wrote it. Eventually, he comes to realize that he’s the only person who remembers the Beatles (later on we find out there are others with this strange infirmity), and after a brief struggle with his conscience he decides to make the most of it and, of course, is a smashing success.

The subtext is almost too obvious to take seriously: The Beatles’ music is indelible for reasons that transcend taste, so of course Jack, even in the 21st century, will be a star playing this stuff. But since he’s also a member of a minority in Britain, and takes the credit for music by not one, but three of the world’s greatest songwriters, the movie has to bear more thematic weight than Richard Curtis’s bland romantic comedy cliches can carry. At one point Ed Sheeran, playing himself with much less self-deprecation than he’s publicly known for, asks Jack to open for him, and, of course, immediately regrets it because he understands just how good Jack’s songs are. The best joke is when they compete at spontaneous songwriting chops, and Jack has all those great songs at his disposal—it’s the kind of gag that Sheeran’s legions of haters will absolutely adore, even if it is unspeakably cruel.

As Jack’s and Ellie’s romance blossoms, Jack’s conscience gets the best of him, and it’s typical of Curtis that he doesn’t really know how to credibly resolve the dilemma, so he aims for the schmaltz. Paul probably loves that aspect of the film, while Yoko obviously didn’t read that far into the script.

This entry was posted in Movies and tagged The Beatles. Bookmark the permalink.