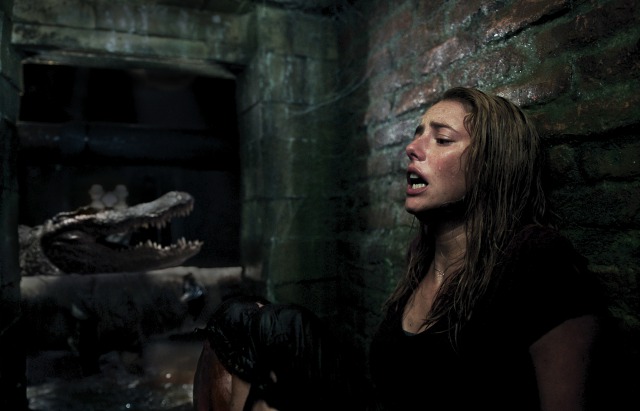 Damsel-in-distress movies still exist, but these days women in peril tend to be the heroes who defeat malevolent forces rather than their victims; though in many cases the deadly force is not malevolent, but merely hungry. In this vein, the gold standard was the 2016 shark movie, The Shallows, which traded in jolts and gore for a simmering suspense fueled by the intelligence of survival. Like that movie, Crawl has a hero who is good with water—she’s a champion university swimmer—but while horror master Alexandre Aja foregoes the usual tactics, he doesn’t quite find a proper rhythm, and the movie feels slack even at 87 minutes.

Part of the problem is that Haley (Kaya Scodelario), the aforementioned swimmer, is motivated by a problem that feels cooked up. When a huge hurricane threatens to pass over the Florida home she grew up in, she finds it difficult to contact her estranged father and former coach, Dave (Barry Pepper), and so endeavors to brave the elements to find out if he’s all right, talking her way past police who have ordered the area evacuated. The father-daughter impasse is touched on so lightly that you wonder why they even bothered, and it seems to have something to do with Dave, who divorced Haley’s mother a while ago, selling the house against his children’s will. None of that matters much, however, when Haley shows up to find Dave trapped in a crawl space in the flooded house, badly injured from the bite of an enormous alligator. It is thus Haley’s job to get him out as the waters keep rising and the alligator’s mischief is compounded by an equally large and ravenous pal.

All filmmaking efforts go into creating an impossible obstacle course for Haley and Dave to navigate and overcome. Aja keeps things lively by allowing the outside world to occasionally peek in, as in one scene where the gators decide to go out in the flooded streets for dumber (and less sympathetic) prey, but for the most part we’re dependent on Haley’s ingenuity and swimming skills for entertainment at the expense of credible dialogue and somewhat hokey emotional salve (there’s a dog, of course). It’s also pretty claustrophobic, but not in a way that makes us uncomfortable. It elicits something closer to annoyance with being stuck in the same place. There’s blood, but you actually wish there was more.