Review: i: Documentary of the Journalist 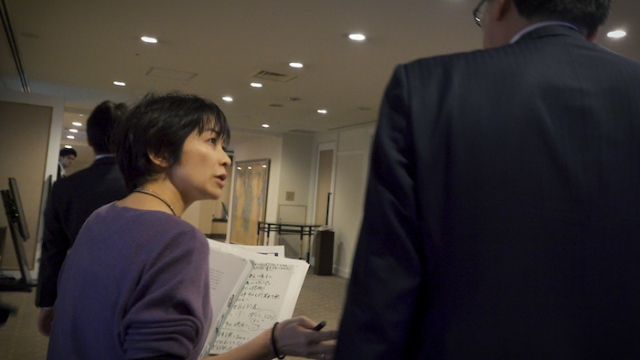 Writer and documentary filmmaker Tatsuya Mori obviously likes titles limited to one letter of the alphabet. The two movies that made him famous, the ones about the Aum Shinrikyo cult, were titled A and A2. The title of his latest, i is a bit of a mystery until it’s explained at the end, so someone, perhaps producer Mitsunobu Kawamura, suggested the secondary title that pointed out it was a film about journalism, or, actually, one journalist in particular, Isoko Mochizuki, who writes for Tokyo Shimbun. Though Mori teaches about media in Japan and is a common pundit on TV for media-related issues, i, apparently, was not his idea, but rather Kawamura’s. The producer also made that fiction film, Shimbun Kisha, that was released several months ago and which was also based on Mochizuki. It was a hit. This is a kind of companion piece and Kawamura thought Mori was just the guy to do it, and he is, except as with all his documentaries, i is more about him than it is about its nominal subject.

Mochizuki has made a name for herself as one of the few reporters who asks tough questions of those in authority, and there is plenty of footage in the movie showing her confronting Chief Cabinet Secretary Yoshihide Suga during regular news conferences at the cabinet office. Mochizuki has been derided by the government for being too insistent, implying that she’s wasting everybody’s time, and for premising her questions on false information. What she’s doing, though, is trying to pin Suga down. Most of the questions depicted in the film have to do with Okinawa, specifically the new U.S. marine base being built at Henoko, and Mochizuki can’t rightly ask a question about things like feasability and whether the government’s construction plans are legal without explaining the background, but since Suga never gives more than a one word answer, which resolves nothing, the exercise really does seem like a waste of time. Mochizuki knows he will answer in such a way, so what she is mainly trying to do is show what a reporter is supposed to do in such circumstances.

Though these news conference snippets are a very small part of the movie in terms of running time, they are the most significant because the whole point is to reveal how toothless the media is due to their complicity in government stonewalling. Unfortunately, we don’t get much of a sense of Mochizuki as a reporter, meaning someone who writes stories. Her interview style is dogged and pointed, and it’s exhilirating to watch her tail her interlocutor down a hallway or ambush him outside his office. But perhaps because he doesn’t see any point in it, Mori never gives us any of the results of these interviews. Is Mochizuki’s reporting making a difference, or just her pugnacious style? In any case, she pursues three topics during the course of the movie: Henoko, the rape case of fellow journalist Shiori Ito, and the Moritomo Gakuen school scandal. Certainly the most telling sequence in the movie is when Mori essentially highjacks Mochizuki’s interview with Moritomo’s owners, Yasunori and Junko Kagoike. It’s as if he were investigating the scandal, not Mochizuki.

Similarly, there are a number of scenes showing Mori trying to gain press credential to cabinet office new conferences, so he can record Mochizuki doing her thing in the flesh, and, of course, he’s constantly turned down because he’s a freelancer. Another freelancer, Tetsuo Jimbo, explains to Mori that it took him 15 years to finally get a seat at the pressers, so it’s hardly necessary to show Mori getting turned down on the phone, but suffice to say that Mori isn’t going to lose to Mochizuki in the persistence department. In the end, i is less about Mochizuki than it is about Mori’s pronouncements about the sad state of news reporting in Japan, which is where the one-letter title comes in. It’s “I” as in first person singular pronoun in English, which Mori thinks is important since the news media addresses its responsibility more as a “we.” To drive home this point, he occasionally flashes an image of a dense school of fish, implying that all Japanese reporters work cohesively to follow and disseminate the government line. It’s a specious analysis, though, because in order for the media to fulfill their responsibility as watchdog they have to confront the powers that be as a group. They have to be as monolithic as the government even if each outlet and writer is pursuing their own agenda. Mochizuki is admirable in her iconoclasm, but that’s the problem, as she points out: She’s only doing what a normal reporter should do. It shouldn’t be extraordinary. Of course, i should be seen by as many people as possible so as to bring home how impotent the mass media is in Japan, but Mochizuki’s quixotic efforts should be seen for what they are: meaningless if they don’t produce news that people can use. Mori doesn’t show that she’s doing that; only that she’s trying.

i home page in Japanese.

This entry was posted in Movies and tagged Isoko Mochizuki, Tatsuya Mori. Bookmark the permalink.