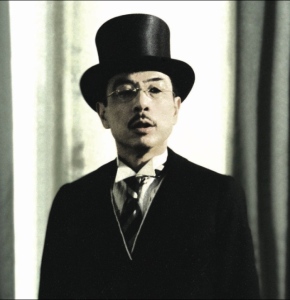 Issey Ogata in “The Sun”

Here’s this week’s Media Mix, which is about the “emperor taboo.” In the piece I refer to an article from 2018 that surveyed movies depicting or otherwise including the emperor in some capacity. Most of the titles mentioned in the article dwelled on World War II, meaning that the emperor under discussion was Hirohito, or Emperor Showa, as he is now called. One of the core reasons for the taboo as it applied to Hirohito is that, despite his renunciation of his divinity, older Japanese still felt him to be something of a god, and, in any case, postwar political thought at least entertained the idea that he was responsible for the war. So while most postwar films that addressed wartime subjects tread lightly around the emperor’s involvement, a few presented that involvement in clever ways that may have flown over the heads of studios and other self-censoring entities. A 1963 comedy called Haike, Tenno Heika-sama, starring Kiyoshi Atsumi of the Tora-san series, included one scene where the bumbling protagonist, newly arrived at a drill area where Hirohito was to appear, comically tries to sneak a peak at the emperor’s face, thus making fun of the whole divine aspect of the monarchy. Of course, the film itself does not show the emperor’s face. In the 1972 movie, Gunki Hata Meku Shita ni, which takes place in the South Pacific near the end of the war, a non-commissioned officer is executed for insubordination, and right before he dies he screams, “Tenno Heika!”, or “His majesty the emperor.” However, the doomed soldier does not add the customary “Banzai!”, an exhortation that expresses the speaker’s hope that the emperor’s reign will last 10,000 years. By leaving out the “banzai” part, the filmmakers signal to the audience that the soldier is not praising the emperor, but rather protesting him or making an appeal, either of which were forbidden before the end of the war.

The most famous non-appearance of Hirohito in a dramatic movie was in Japan’s Longest Day, a 1967 feature about the decision to surrender. In this film, the emperor was only shown from the back, and the situation was so sensitive that the identity of the actor who supplied that back was kept secret by the studio so as not to endanger his life. Notably, in the 2015 remake of the movie, the emperor was played by former idol singer Masahiro Motoki, who, of course, looks nothing like Hirohito, which may have been the point. It’s certainly the most open depiction of Emperor Showa ever attempted in a Japanese movie, but because Motoki is so well-known, there was no risk of people somehow identifying the image on the screen with the actual person being represented. In any case, certain traditionalists were still taken aback and protested accordingly.

Foreign filmmakers have no such taboo, but interestingly enough, Japanese emperors in Hollywood movies tend to be played by kabuki actors, as in The Last Samurai and Emperor. Perhaps it’s coincidental, but the pedigree of both kabuki stars and the imperial family are based solely on male lineage. The great exception is the comic actor Issey Ogata who played Hirohito as a mumbling, distracted little man in Aleksandr Sokurov’s The Sun, a decidedly non-Hollywood movie that found distribution in Japan despite itself. The casting, in fact, was more noteworthy than the film itself, which was so insular as to be almost meaningless in terms of shedding light on the emperor as an individual. He was definitely a man in the script, but his relationship to the war and, more significantly, his subjects was almost perversely vague.

This entry was posted in Movies and tagged Emperor Showa, Hirohito. Bookmark the permalink.