Posted on December 1, 2019 by philipbrasor 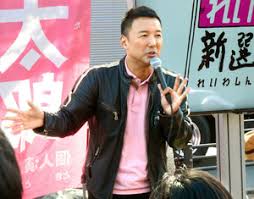 Here’s this week’s Media Mix about Reiwa Shinsengumi leader Taro Yamamoto, who was profiled and analyzed in several cover stories in a recent issue of Newsweek Japan. As pointed out in the column, Yamamoto currently holds no elected office, a situation that essentially gives him plenty of time to formulate his party’s position toward the next general election, when he plans to field about a hundred candidates. He had made no secret of his personal ambition to become prime minister, sooner rather than later, and while that sounds like the usual bluster of a political neophyte, a lot of people in the media are taking him seriously if for no other reason than that he offers a credible alternative to a status quo in which the LDP remains the ruling party mainly because the opposition can’t get its shit together. Newsweek centers Yamamoto’s chances on his left-wing populism, which I attempt to explain in the column. My own feeling is that Yamamoto’s popularity has more to do with his personal engagement in politics, which is a mixture of the kind of charisma associated with right-wing populism—thus, the misgivings of people like filmmaker Tatsuya Mori about his authoritarian tendencies—and an instinctual approach to issues, which he tackles almost recklessly.

If progressives find his non-stance on climate change disappointing and his approval of the emperor system confounding, they still see him as someone who, given the chance and a solid platform, could actually make a difference in a country where differences tend to get pushed aside and change is incremental at best. Because his candidates not only stand for something but represent those positions through provable experience, it’s clear he intends to run on the issues rather than on the usual vague platitudes, so the real question about his party’s prospects is how will he implement such changes? The last time the opposition gained power it ran up against the implacability of the bureaucracy and lost. Though the LDP’s success has always been explained by the general apathy of the public—if it ain’t broke then don’t fix it, except, of course, it is broke—a better explanation of their longevity in power is that they understand that the permanent government runs things in Japan and that they are simply its democratic facade. The bureaucracy allows the LDP to make money for its members as long as those members implement the bureaucracy’s plans. When the now defunct Democratic Party of Japan tried to implement actual change, the bureaucracy successfully and somewhat dishonestly shut them down—most apparent in the matter of the U.S. bases in Okinawa—and their brief tenure as the ruling party is now considered a disaster. The bureaucracy tolerates sideshows such as Shinzo Abe’s lifelong dream to change the Constitution because they don’t think the Constitution applies to them (look at the courts, which are supposed to uphold the Constitution but just uphold the status quo). If Yamamoto’s party does gain some kind of power balance in the near future, this is the central matter he has to confront before he can effectively wield that power. Otherwise he’ll end up howling at the wind like everyone else in the “permanent opposition.”

This entry was posted in Media and tagged Reiwa Shinsengumi, Taro Yamamoto. Bookmark the permalink.