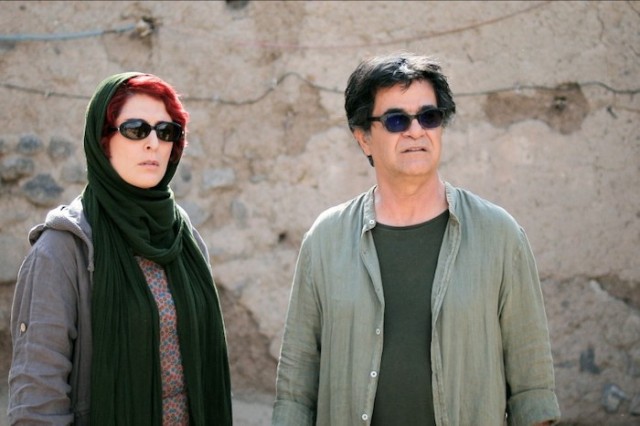 In his last samizdat production, Taxi, Jafar Panahi spent almost the entire running time behind the wheel. He spends a good portion of his latest movie also in a car, thus in a way extending a cinematic style perfected to obsessive lengths by his late mentor Abbas Kiarostami, many of whose last films took place in moving vehicles. For Panahi, the device takes on an extra layer of meaning, since he is banned from making movies for 20 years by the Iranian government. His first two forbidden works were resolutely indoor affairs, but with Taxi and now 3 Faces he endeavors to get out of the house, and cars provide just enough cover for him to scratch his creative itch without being noticed (cameras are by necessity very small when filming in a car, and no crew). However, here he’s also incorporated a long automobile trip into a story that takes him far from Tehran, into the mountains bordering Turkey, where people are familiar with his celebrity but not close to any government organs that might risk his being exposed.

The story he has fashioned around this conceit is probably his most expansive and conventional since going underground. Playing himself, he is driving the well-known actress Behnaz Jafari to a remote mountain village to find out if a girl who purportedly hanged herself after failing to get in touch with Jafari actually died. The girl (Marziyeh Rezaei) records her last minutes with her iPhone, saying that she desperately wanted to talk to Jafari about her own discouraged desire to become an actress, and when the older woman never replied she saw no future for herself. Jafari tells Panahi that she has no knowledge of these attempts to contact her, and is frantic with guilt and worry, and so talks him into accompanying her into the mountains, a trip that requires riding over rough, winding roads for hours. Occasionally, they have to stop for an hour or two to let a herd of cows or a cart pass.

Structured as a kind of missing persons mystery, the film follows the cosmopolitan pair as they are recognized by villagers who fete them as lavishly as they can. They beg off unsuccessfully but in order to find out if the girl really did kill herself they have to be indirect and discreet with their questions, a strategy that leads to misundertandings both serious and humorous. In his other post-ban works, Panahi had to work around his limitations, but here he seems almost recklessly liberated by the resources at hand, allowing seemingly ad libbed conversations with locals to veer off on odd tangents. The overall feeling is of strangers stranded in a strange land—many of the pair’s interlocutors speak only Turkish and not Persian—and as Panahi and Jafari find it increasingly difficult to get at the truth, the death they hope is a hoax seems to permeate everything they encounter, because life in a hardscrabble environment like this one means always living in death’s immediate shadow.

But the film has its surprises, the most potent of which is how unexpectedly dramatic it is. The implication of the suicide, regardless or whether it was real or staged, is that freedom of thought is even more of an illusion the further you get from the relative open-mindedness of the city. Though the girl tried to contact Jafari, a worldly woman whose impatience with the villagers is striking, it is with Panahi that her story resonates. She deigned to kill herself out of frustration with being kept from pursuing her dreams, while Panahi has somehow overcome his own proscriptions. What can he tell this girl when he meets her? It’s the movie’s most compelling mystery.

This entry was posted in Movies and tagged Jafar Panahi. Bookmark the permalink.